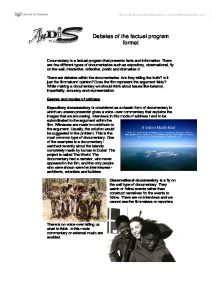 Debates of the factual program format Documentary is a factual program that presents facts and information. There are few different types of documentaries such as expository, observational, fly on the wall, interactive, reflective, poetic and dramatised. There are debates within the documentaries. Are they telling the truth? Is it just the filmmakers' opinion? Does the film represent the argument fairly? While making a documentary we should think about issues like balance, impartiality, accuracy and representation. Genres and modes of address Expository documentary is considered as a classic form of documentary in which an unseen presenter gives a voice-over commentary that explains the images that we are seeing. Interviews in this mode of address tend to be subordinated to the argument within the film. Witnesses are made to contribute to the argument. Usually, the solution would be suggested to the problem. This is the most common type of documentary. One of the examples is a documentary I watched recently about the islands completely made by human in Dubai. The project is called The World. The documentary had a narrator, who never appeared in the film, and the only people who were shown were he interviewees- architects, scientists and builders. Observational documentary is a fly on the wall type of documentary. They watch or follow events rather than construct narratives for the events to follow. There are no interviews and we cannot see the filmmakers or reporters. ...read more.

Both use non- professional actors; both blend documentary filming techniques with fiction; both pictures crusade to raise awareness of the plight of illegal immigrants. The films even share the same editor. But while Winterbottom's picture is predominantly concerned with the journey, Broomfield's focuses on the treatment of Chinese immigrants once they arrive, without papers, without rights and saddled with an impossible debt to their traffickers.' The Times Debates Are documentaries telling the truth? This is one of the common debates about factual programming. In my opinion the truth in documentaries is bias. What I mean by it is that the truth is based on the thoughts and opinions of the filmmaker. Therefore the documentary becomes their truth. This now brings me to discuss objectivity within factual programming. It is very hard to make a documentary that isn't biased to one opinion and is fair towards both sides of an argument. Even though filmmakers try to be objective they will always put across their opinion in their film. Many documentaries address the audience politically, for instance factual programmes by Michael Moore. His documentaries represent only his opinion, especially in film Sicko. Furthermore, I am going to use Micheal Moore to demonstrate how controversial issues can be used to attract the audience and how they become a unique selling point of a documentary. He uses a very controversial subject such as health care in U.S. ...read more.

Roger Friedman of Fox News called the film a "brilliant and uplifting new documentary" and praised Moore for the way in which he lets "very articulate average Americans tell their personal horror stories at the hands of insurance companies" and "criticizes both Democrats and Republicans for their inaction and in some cases their willingness to be bribed by pharmaceutical companies and insurance carriers." Film critic Stephen Schaefer of the Boston Globe described Sicko as "a very strong and very honest documentary about a health system that's totally corrupt and that is without any care for its patients." Columnist and movie reviewer Michael Medved wrote "In contrast to his previous films, Moore delivers no entertainment value in this dull, didactic downer; and, as an editorial it's so completely one-sided that it's useless with not the slightest mention that 'free' medical care actually costs tax money or any conversation with people who disagree with Moore's pro-socialized-medicine point of view." Issues Some of the issues in factual programs are accuracy, balance and impartiality. Making documentaries we need to make sure that we are as accurate as possible. We have represent and show the real facts. We cannot twist no information or lie. Being impartial within factual programming or keeping balance is slightly harder to do. Everyone has their opinion and before making the documentary, especially about controversial issues; we are already on one side of the argument. But it is important that we try to keep balance and show the another side of the argument as well. ...read more.

Overall, this essay provides an informative overview of the main different documentary modes. It also offers debate on issues of truth, impartiality and balance affecting the contemporary documentary.
However, it could be greatly improved by closer references to the various texts and case studies to give it more context and by the use of media terminology.
There are some lapses in expression and grammar which at times affect the smooth flow of the essay.