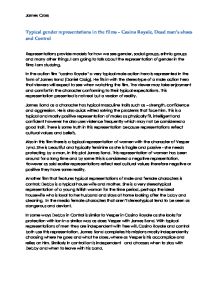 Typical gender representations in the films - Casino Royale, Dead man's shoes and Control Representations provide models for how we see gender, social groups, ethnic groups and many other things, I am going to talk about the representation of gender in the films I am studying. In the action film "casino Royale" a very typical male action hero is represented in the form of James Bond (Daniel Craig). He fits in with the stereotype of a male action hero that viewers will expect to see when watching the film. The viewer may take enjoyment and comfort in the character conforming to their typical expectations. This representation presented is not real but a version of reality. James Bond as a character has typical masculine traits such as - strength, confidence and aggression. ...read more.

She is a very stereotypical representation of a young British woman for the time period, perhaps the ideal housewife who is loyal to her husband and stays at home looking after the baby and cleaning. In the media female characters that aren't stereotypical tend to be seen as dangerous and deviant. In some ways Debby in Control is similar to Vesper in Casino Royale as she looks for protection with Ian in a similar way as does Vesper with James Bond. With typical representations of men they are independent with free will, Casino Royale and control both use this representation. James Bond completes his missions mostly independently choosing where he goes and what he does, where as Vesper is his accomplice and relies on him. Similarly in control Ian is independent and chooses when to stay with Debby and when to leave with his band. ...read more.

This is a very insightful discourse on why stereotypes seem real to conventional audiences. It is well written in clear and simple language, and on the whole the structure is logical and pleasing, leading to an insightful and convincing conclusion.

The essay does lack detailed analysis of examples from the films, and instead of describing actual events, objects or behaviours that prove their argument, the essayist's argument relies instead on quite general descriptions of the characters. This is a weakness, but an easy one to address, and it does not detract from the accuracy or insight of the argument itself.