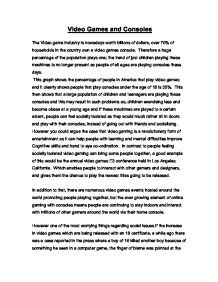 Video Games and Consoles The Video game industry is nowadays worth billions of dollars, over 70% of households in the country own a video games console. Therefore a huge percentage of the population plays one; the trend of just children playing these machines is no longer present as people of all ages are playing consoles these days. This graph shows the percentage of people in America that play video games and it clearly shows people that play consoles under the age of 18 is 35%. This then shows that a large population of children and teenagers are playing these consoles and this may result in such problems as, children exercising less and become obese at a young age and if these machines are played to a certain extent, people can feel socially isolated as they would much rather sit in doors and play with their consoles, instead of going out with friends and socialising. However you could argue the case that video gaming is a revolutionary form of entertainment as it can help people with learning and mental difficulties improve Cognitive skills and hand to eye co-ordination. In contrast to people feeling socially isolated video gaming can bring some people together, a good example of this would be the annual video games E3 conference held in Los Angeles California. ...read more.

Since technology has been widely available for people to copy cd's the amount of money major developers of games have lost is estimated to be around $1.9 billion. The ELSPA (Entertainment and Leisure Software Publishers Association) is the governing body responsible for giving games their age rating, publishing weekly sales charts, piracy and copyright law enforcement and Industry promotion just to name a few. At first the ELPSA was a small company with just 10 members but now it boasts over 100 members, these such companies include Sony, Microsoft, Sega, Nintendo, Activision, Eidos and Rockstar North. All of these companies are producers of mass selling games in which the ELSPA is responsible for making sure their games are suitable for the consumer market. As a result of the ELSPA controlling so much of the legal aspects of the gaming world they are a vital figure head in the industry as they provide assistance to these companies in the fight against piracy and copyright violations. In addition they publish accurate weekly, monthly and yearly sales charts to show clearly which game is doing the best. Piracy and copyrighting violations in China and Vietnam is said to be the worst on earth as the percentage of pirated copies of games there is around 90%, this clearly shows the change ...read more.

With many major technological developments stemming from Japan, they deserve a lot of the credit for making the video games industry what it is today. As a result of Japan being so technologically advanced this enabled other countries such as the USA to become just as advanced, with this came about the first ever video games console in 1972, the Magnavox odyssey was released to start off what eventually one day would be one of the largest entertainment industries in the world. Grossing over $10 billion each year between all companies. In 1972 the Magnavox odyssey was released along with other consoles such as the Fairchild entertainment system and PONG, all of these had the same basic concept which incorporated the idea of basic black and white table tennis being played on the television screen, PONG was the most successful at the time with a PONG machine being found in most pubs and clubs you went into. Throughout the late 70's and early 80's many consoles and games were released, such companies as Atari and Nintendo were responsible for releasing these products which eventually flooded the market in 1984 and they stock of the games industry crashed by 34% in on hour, ...read more.