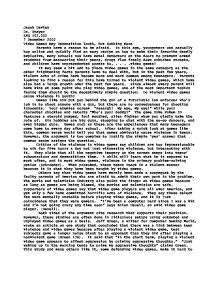 Video Games May Desensitize Youth, But Nothing More.

Jacob Davies Dr. Stayer ENG 102.002 7 December 2000 Video Games May Desensitize Youth, But Nothing More Parents have a reason to be afraid. In this age, youngsters can casually hop online and quickly find an easy recipe on how to make their favorite deadly explosive, many schools now have metal detectors at the doors to prevent armed students from massacring their peers, drugs flow freely down suburban streets, and children have unprecedented access to. . . . .video games? It may seem a bit odd to place video games in the same category as the other frightening facts parents have to deal with, but in the past few years, violent acts of crime have become more and more common among teenagers. Parents looking to find a reason for this have turned to violent video games, which have also had a large growth over the past few years. Since almost every parent will have kids at some point who play video games, one of the most important topics facing them should be the deceptively simple question: Do violent video games cause violence in youth? Games like SiN put you behind the gun of a futuristic law enforcer who's job is to shoot anyone with a gun, but there are no consequences for shooting innocents. ...read more.

Until better studies are done on this topic, the argument remains a collection of different opinions. One such opinion is from Lt. Col. Dave Grossman who retired from the U.S. Army in 1998 and has written many different books on the subject of teaching others how to kill effectively. He states that video games "destroy your violence immune system and condition you to derive pleasure from violence" (Grossman). Then he says that "once you are at close range with another human being, and it's time for you to pull that trigger," desensitization from media destroys your natural resistance to violence and you are more prone to shoot the gun (Grossman). Being an avid video game player, I agree with Grossman on his point that video games probably do desensitize youth. However, I do not think that this is as much of a problem as Grossman would have people believe. In his article, he tells a story about two teens who decided they would go rob a convenience store. One of the boys, who was a video game player, had a gun pointed at the clerk. When the clerk turned around, the boy accidentally shot him because of his reflexes. ...read more.

All video games have a rating given by the Entertainment Software Rating Board (ESRB) from "E-everyone" to "AO-adults only" (ESRB). If the ESRB's guidelines are followed, then parents can be sure that their children are playing the game that is right for them. I do not think there needs to be a banning of video games or a strict set of rules put on the industry like some have suggested. Not only will that cause a major national debate relating to first amendment rights, but it also just doesn't make sense to do that when so little is known on the subject at this point. "We can't make social policy based on the statistical aberrations of a handful of abnormal kids," says Henry Jenkins, author of From Barbie to Mortal Kombat. I am willing to believe that violence in video games causes desensitization in teens, but I disagree with the idea that it causes violence in youth. Desensitization has a very bad connotation, when the truth is that it does not automatically lead to violent acts. The children who play violent video games and have committed horrendous crimes were a mere coincidence. They were had a violent nature because they were mentally and psychologically deficient, not because they shot a few aliens in an electronic game. ?? ?? ?? ?? Davies 2 ...read more.