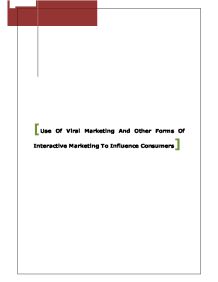 It is the time when viral marketing is in vogue. Viral marketing was a term originally coined by venture capitalist Steve Jurvetson to describe the unique referral-marketing program created by Hotmail, one of the first free e-mail services. Definition Viral marketing is one of the most effective forms of interactive marketing. Viral marketing refers to marketing techniques that use pre-existing social networks to produce increases in brand awareness, through self-replicating viral processes, analogous to the spread of pathological and computer viruses. It can be word-of-mouth delivered or enhanced by the network effects of the Internet. Viral marketing is a marketing phenomenon that facilitates and encourages people to pass along a marketing message voluntarily. 1 The following points throw light on the difference between traditional form of marketing and viral marketing. * Success bares no relation to investment - While in traditional marketing there is generally a relationship between the money spent and number of people viewing the message, there is no such relationship in viral marketing. * Viral marketing does not have a timeline - Traditional marketing calendars, and even the traditional marketing plan is irrelevant when executing and responding to viral marketing efforts. Viral marketing is just not that predictable, which calls for a different kind of planning. * Number of views bare little relation to reach or impact of viral marketing - As viral is something that is shared from person to person, one can be sure that many more people hear about it than view it. The science behind Viral marketing Induction of a Viral growth is both an "art" and "science". The science component relates to the ability to calculate the reach and systematically measure all aspects of user response to viral campaigns. This lets iterative refinements of features and experience to boost propagation rates. The "art" component relates to the fact that the campaign should (a) be logically consistent with a brand's primary value proposition and (b) ...read more.

The breakout of these 100 respondents is as given below: * Gender : Male - 75%; Female - 25% * Age: 18-24 - 60%; 25-34 - 39% * Education: Post Graduate - 64%; Bachelors degree - 31% * Employment Status: Student - 55%; Employed full time - 34% Survey Result Following 2 snapshots of viral ads were shown in the beginning and ad and brand recall was tested At this stage, following links for both the ads were given to the respondent and asked to see the ads before moving further. http://www.webchutney.com/virals/udi.html http://www.webchutney.com/virals/moving_train.html Some prominent responses were * Cheap airfares o "claim of cheapest service and paying diff is good" o "cheap, affordable flights available for all" o "if the dhobis can fly then even u can" o "one stop portal to look for cheapest of all airline" * Convenient way of booking airline tickets * Substitute trains with flights * Too big, boring, does not convey anything about services other that low air fare Majority of respondents agree that * Ad message is understandable * Ad and the benefits of service are believable * After viewing these ads, they would consider using the service But they were neutral about service being different as compared to that of competitors Majority of the respondents described ad as: * Creative * Humorous * Attention-grabbing * Different & new * Wouldn't mind seeing again * Cheerful However, a few were of the opinion that the ads were: � Boring / Irritating � Too long � Waste of money � "Seeing this ad I wonder whether people take MakeMyTrip seriously as a service company" The Viral Effect Based on this result, 48% people don't forward the ad to anyone, 26% people forward the ad to 3 people (on an average), 16% forward the ad to 8 people, and so on. Therefore, 100 people in our sample size will forward the ad to 434 people. No. of people who get the ad as forward or reference will increase as: This proves the Viral effect stated earlier. ...read more.