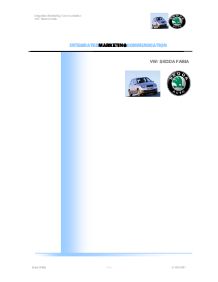 During the following essay we are going to be looking at the concept of integrated marketing communication (IMC) for the Skoda brand. Skoda prior to the year 2000 had a humorous and weak reputation among the UK market. With such jokes as "what do you call a Skoda with a sun roof? A skip" However this situation was far from a joke for Skoda, during 1991-1998 massive losses were made. However despite these factors Volkswagen turned their 30% stake acquired in 1991 to complete control of the company in 2001. Skoda now lead by VW and coupled with a IMC plan have transformed their reputation and seen sales leap in the UK market with even the unthinkable...... they had a waiting list. This essay will discuss how VW used IMC for the Fabia car that changed Skoda's reputation. We will look at the way in which VW pieced together the common tools of IMC to achieve a marketing campaign that has not only increased sales and image but also been reckonised by media and business circles with several awards (Winner of Best Change of Direction award and John Bartle Award for Best New Agency) However we will also look at the negative side of IMC and discuss barriers to its implementation as well as some of the confusion surrounding its definition not only by marketers but also crucially by the companies themselves. Integrated Marketing Communications is fairly new on the marketing scene and was deemed to be brought in by Schultz, Tannenbaum and Lauterborn in 1993 (Schultz et,al 1993) amid the increasing commercial message clutter in the market. As we can see from the communication process (Adapted from Duncan, 2002, p127) below this is Illustrated by the noise factor. With more commercial message clutter it becomes increasingly harder for agencies and firms to get their desired message across to customers. This is backed by Dan O'Donoghue(1997) ...read more.

From the perceptual map below we see that their perceptual mapping has changed greatly. Although this change of positioning would help improve product and price(4p's) it will however bring about new competition among more established brands such as Ford, Vauxhall rather than that of say Reliant Robin. VW's Perceptual Map Of Skoda However it is all good and well to say that you wish to be mapped at this new level but this needs to be integrated both horizontally and vertically as briefly discuss before. Many companies have fallen by advertising and mapping their goods as supreme products yet when it comes to it they haven't integrated enough horizontally and their product has actually been of inferior quality. A recent software example of this would be the amazing hype surrounding a soccer management game called Championship Manager 4. Marketing deemed this software to have everything, yet when released it was riddled with 100's of bugs reducing it to being unusable which in turn built up major return rates of the product. In the process damaging the product reputation and almost rendering the advertising meaningless. (www.eidos.co.uk) clearly we see a complete lack of horizontal and vertical integration between production, marketing and management. Why was a unfinished product being advertised? why was it ever released? A truly integrated campaign would have pulled everything together and gone for the same goal. In the case of Skoda Fabia VW certainly integrated horizontally and vertically. Before the launch of the Fabia Skoda were very motivated about providing quality therefore all participating parties were integrated from the beginning, the developers, manufacturers, quality controllers and suppliers were all involved in the overall quality concept. Skoda even held back on production until the production process had stabilized, meaning that high quality was implemented from the start of the Fabia series and also resulted in the ISO9001 and ISO9002 quality awards for the car. ...read more.

The holistic approach of IMC allows for a consistent message to be delivered to its target audience and also allows for a consistent and complimentary set of follow up procedures or concepts throughout the consumer buying process which helps reduce confusion and was looked at in the AIDA model. Also follow this with increased corporate cohesion, client relationship, interaction, motivation, participation, increased efficiency and improved profits From the above you would assume everyone would be joining the band wagon, however it appears the problem with IMC is once you are there everything appears to be beneficial with IMC however the biggest problem and barrier is actually gaining the status of a truly integrated company. Human nature is very stubborn. Change isn't easily accepted especially if it could hinder oneself. Sadly a negative side to IMC does require change and some people will loss out initially with power lost, reduced budgets and possible loss of skilled workers which certainly can damage possible integration both horizontally This certainly doesn't do much to wet the appetite; however companies must enable management staff to see beyond these matters. Much HRM theory proves that working together and integrating to solve a problem or achieve a goal reaps more beneficial results (C.Oswick) Now lets take a moment and consider the Skoda campaign. Coming from a modest background as a child we had a bright orange Skoda. Many a day went by were I hated going to school in it then took the jokes and so forth. However now the concept has totally change if I were I child in a Skoda today I doubt a comment would be made. It shows quality and the perception has changed. Without IMC that may not have happened. Overall IMC is a very useful approach to marketing and certainly brings its benefits, if a company has the right foundations and mind to implement IMC I would certainly bring about its recommendation. Mark Willis - 1 - 014257991 ...read more.