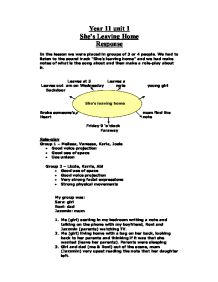 We had to listen to the sound track &quot;She's leaving home&quot; and we had make notes of what is the song about and then make a role-play about it.

Year 11 unit 1 She's Leaving Home Response In the lesson we were placed in groups of 3 or 4 people. We had to listen to the sound track "She's leaving home" and we had make notes of what is the song about and then make a role-play about it. Leaves at 5 Leaves a Leaves out am on Wednesday note young girl Backdoor She's leaving home Broke someone's mum find the Heart note Friday 9 'o'clock Faraway Role-play Group 1 - Melissa, Vanessa, Karla, Josie * Good voice projection * Good use of space * Use unison Group 2 - Lizzie, Karris, Abi * Good use of space * Good voice projection * Very strong facial expressions * Strong physical movements My group was: Sara: girl Roxi: dad Jazzmin: mum 1. Me (girl) seating in my bedroom writing a note and talking on the phone with my boyfriend, Roxi and Jazzmin (parents) watching TV. 2. Me (girl) living home with a bag on her back, looking back to her parents and thinking if it was that she wanted (leave her parents). ...read more.

She (We gave her most of our lives) is leaving (Sacrificed most of our lives) Home (We gave her everything money could buy) She's leaving home after living alone for so many years. Bye, bye. Father snores as his wife gets into her dressing gown Picks up the letter that's lying there standing alone at the top of stairs she breaks down and cries to her husband Daddy our baby's gone. Why would she treat us so thoughtlessly how could she do this to me? She (We never thought of ourselves) is leaving (Never a thought for ourselves) Home (We struggled hard all our lives to get by) She's leaving home after living alone for so many years. Bye, bye. Friday morning at nine o'clock she is far away waiting to keep the appointment she made Meeting a man from the motor trade. She (What did we do that was wrong) is leaving (We didn't know it was wrong) Home (Fun is the one thing that money can't buy) ...read more.

Scene 2- on the next day dad wakes up from the sofa and remembers what happened on the day before, he goes to his daughter room asking for forgiveness but she wasn't in her room, he looked around the house and he couldn't find her. So he called the mum and she comes quickly. Scene 3- mum tells dad to call the police, and after they go and try to find her but they didn't. The police called the dad to the station because they had found a dead body of a young girl. The parents were worried and hurried to see the body. When they went there mum staid outside and dad went to see the body but luckily it wasn't their daughter. The parents were happy but no same time their were sad and worried because their daughter is still missing. Scene 4- dad remembered that she would be in the cemetery so they went there and then they found her sleeping next to her grandmother tombstone sleeping they were so happy and they decided to go home together. And this is how far we have gone. ...read more.