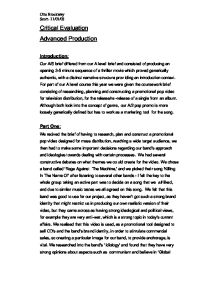 We recived the brief of having to research, plan and construct a promotional pop video designed for mass distribution, reaching a wide target audience.

Critical Evaluation Advanced Production Introduction: Our A/S brief differed from our A level brief and consisted of producing an opening 3-5 minute sequence of a thriller movie which proved generically authentic, with a distinct narrative structure providing an introduction context. For part of our A level course this year we were given the coursework brief consisting of researching, planning and constructing a promotional pop video for television distribution, for the release/re-release of a single from an album. Although both look into the concept of genre, our A/2 pop promo is more loosely generically defined but has to work as a marketing tool for the song. Part One: We recived the brief of having to research, plan and construct a promotional pop video designed for mass distribution, reaching a wide target audience, we then had to make some important decisions regarding our band's approach and ideologies towards dealing with certain processes. We had several constructive debates on what themes we could create for the video. We chose a band called 'Rage Against The Machine,' and we picked their song 'Killing In The Name Of' after listening to several other bands- I felt the key to the whole group taking an active ...read more.

We also had to research into our target audience and how we could make our video appealing to them. We decided that our target audience would be male and age from about forteen to twenty-one in the western world, from this we thought that such things as special effects would be appealing to them, along with a video that would look at the same issues that appeal to the band. The sole reason for a record company to create a video is to promote the single and create a brand identity, and the function of the single is to promote the album, which is ultimately where the money is made, so it is vital for the single and therefore the video to be well received by the target audience. Working for an independent record company means that the pop promo if slightly more flexible as it is driven mostly by creativity. We learnt that most pop videos have a strong narrative structure with reoccurring thematic elements, alongside performance elements, which provides anchorage for the band. The performance is usually lip-synched which also provides anchorage, the pop video is a chance for the band members to show who they really are, and in the case of 'Rage,' what they stand for. ...read more.

Up to the day of the shoot things were changed due to us wanting only what would compliment the production style. Our video was shot using multi-camara angles (Sony PD 100) in a studio environment which was vision mixed via a Panasonic MX90, and then recorded on a mini DV tape. We used Pin spots and Macros(lights- static and moving), which were blue, yellow and white- the clour was important as we used it to help create an identity throughout the video. The video was cut on Media 100, on a G4 Macintosh. If we were to compare it to a professional video I think that ours proved to be nearly as effective. We created the video in the same way as a marketing department might have done in a record company, only in a shorter period of time, looking at not only what would make a good video and appeal to the fans, but what would compliment and build up the band's strong identity. I feel that the video that we produced created a strong identity for the promotion of the song, and could almost compare to a professional video of the same stance. Otto Brockway Scott- 11/01/03 ...read more.