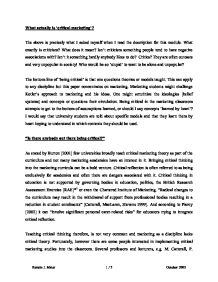 What actually is 'critical marketing'?

What actually is 'critical marketing'? The above is precisely what I asked myself when I read the description for this module. What exactly is criticism? What does it mean? Isn't criticism something people tend to have negative associations with? Isn't it something hardly anybody likes to do? Critics? They are often outcasts and very unpopular in society! Who would be so 'stupid' to want to be alone and unpopular? The bottom line of 'being critical' is that one questions theories or models taught. This can apply to any discipline but this paper concentrates on marketing. Marketing students might challenge Kotler's approach to marketing and his ideas. One might scrutinize the ideologies [belief systems] and concepts or questions their circulation. Being critical in the marketing classroom attempts to get to the bottom of assumptions learned, or should I say concepts 'learned by heart'? I would say that university students are told about specific models and that they learn them by heart hoping to understand in which contexts they should be used. "Is there anybody out there being critical?" As stated by Burton [2001] few universities broadly teach critical marketing theory as part of the curriculum and not many marketing academics have an interest in it. Bringing critical thinking into the marketing curricula can be a bold venture. Critical reflection is often referred to as being exclusively for academics and often there are dangers associated with it. Critical thinking in education is not supported by governing bodies in education, politics, the British Research Assessment Exercise [RAE]*1 or even the Chartered Institute of Marketing. ...read more.

These people came up with their smart ideas ages ago. Marketing has developed considerably in the post-war era so are they really relevant to today's society? A good example of bringing theory and practice together is a German scheme called "Berufliche Ausbildung" [Vocational Education]. Students not only attend courses, lectures and tutorials, they also work for a company at the same time on a rotational basis. Secretarial students, for example, spend several weeks doing computer courses, then several weeks attending lectures and tutorials and then they spend several weeks working in a company. This continues over the period of the course and each work placement company knows what stage the student is at and what experience he or she has. In this way students are able to combine what they learn with what they are doing in the company without being swamped. The advantage is that theory can be directly tested in practice. I underwent this sort of training and feel it is a very sensitive way to educate young people away from 'school' into the 'real world' bit by bit. Before I started my Marketing Management course I had been working within marketing departments of different companies. I thought it would be very helpful to study this degree and gain a more theoretical background to what I had previously done and for what I wanted to do in the future. One of the first things I quickly realized is that much of the theoretical knowledge I am taught at university does not always relate to the 'real world'. ...read more.

To be superior when it comes to rhetorical power is only an advantage if, one speaks about something but does not really want the audience to know what he or she is on about. If critical thinking is to be implemented into marketing education then the target audience, young and inexperienced students should be considered with regard to the language used. I have also asked myself if students will study critical thinking in the same way as they tend to study the mainstream theories of marketing. Students may show agreement, nod their heads and just take it as correct as they do with other subjects but will they really give it much thought? I have found that some people at university do not really think for themselves, they just take what they have been given [any theories], and study it by heart so that they can just 'throw it all up' in the exams. There is for example always panic in the air when a lecturer does not have overhead slides. Some students seem never to have learned to be free with their thoughts. I sometime wonder if some students really understand what they are doing. When speaking to a fellow student about critical thinking marketers she said: "Yes, they should start thinking a bit more and contribute more to society! I mean, it's pretty inconsiderate and selfish to produce mini skirts in a size 16!" Well, there you go! I can't wait for more people to be critical! Kerstin J. Maier 1 / 5 October 2003 ...read more.