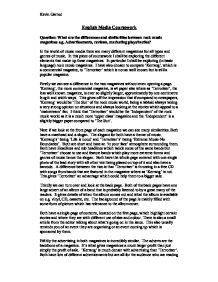 What are the differences and similarities between rock music magazines e.g. Advertisements, reviews, marketing ploys/tactics?

English Media Coursework Question: What are the differences and similarities between rock music magazines e.g. Advertisements, reviews, marketing ploys/tactics? In the world of music media there are many different magazines for all types and genres of music. In this piece of coursework I shall be exploring the different elements that make up these magazines. In particular I shall be exploring (in basic language) rock music magazines. I have also chosen to compare 'Kerrang', which is a commercial magazine, to 'Terrorizer' which is not as well known but is still a popular magazine. Firstly we can see a difference in the two magazines without even opening a page. 'Kerrang', the more commercial magazine, is a4 paper size where as 'Terrorizer', the less well known magazine, is ever so slightly larger, approximately by one centimetre length and width ways. This gives off the impression that if compared to newspapers, 'Kerrang' would be 'The Sun' of the rock music world, being a tabloid always taking a very strong opinion on situations and always looking at the stories which appeal to a 'mainstream' fan. ...read more.

A difference between the two is that 'Terrorizer' is throwing in a free CD with songs from bands that are featured in the magazine where as 'Kerrang' is not. This gives 'Terrorizer' an advantage which could help them to a bigger sale. Thirdly we can turn over and look at the back page. Both of the back pages have one large advert of an album of a band that is probably listened to by a great many of the readers. It gives details of when the album comes out and what the album is available on e.g. vinyl, CD, cassette, etc. The background of the page is mainly filled with some form of picture which has relevance to the album cover. Both have a single page of contents, located on the first page, which highlight certain stories and where they are with different use of size and colour. There is also a small article from the editor talking about what's going on in the issue. ...read more.

Also both seem to take the opposite views on nearly the entire CD reviews IE 'Terrorizer' praises one band where as 'Kerrang' doesn't. Also 'Terrorizer's' reviews are almost twice as long as 'Kerrang's' and go into more detail with particular songs. They also give constructive criticism and praise where as 'Kerrang' just gives an opinion and doesn't go into much detail with regards to the actual way the music is sounding. In other words they don't even give a remote description of the music unless it's an opinionated description. You can see why 'Kerrang' is popular in the same way you can see the 'Sun' is popular but personally I would rather go out and buy a magazine which offers more to read; a free CD: and constructive reviews with less advertising rather than buy a magazine with fewer stories; less informative reviews; bias stories; and one which costs an extra pound. So I would buy 'Terrorizer' for all the reasons above and for a generally better read. Kevin Garrod ...read more.