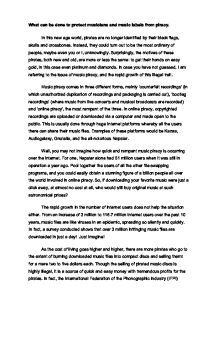 What can be done to protect musicians and music labels from piracy.

What can be done to protect musicians and music labels from piracy. In this new age world, pirates are no longer identified by their black flags, skulls and crossbones. Instead, they could turn out to be the most ordinary of people, maybe even you or I, unknowingly. Surprisingly, the motives of these pirates, both new and old, are more or less the same: to get their hands on easy gold, in this case even platinum and diamonds. In case you have not guessed, I am referring to the issue of music piracy, and the rapid growth of this illegal trait. Music piracy comes in three different forms, mainly 'counterfeit recordings' (in which unauthorized duplication of recordings and packaging is carried out), 'bootleg recordings' (where music from live concerts and musical broadcasts are recorded) and 'online piracy', the most rampant of the three. In online piracy, copyrighted recordings are uploaded or downloaded via a computer and made open to the public. This is usually done through huge internet platforms whereby all the users there can share their music files. Examples of these platforms would be Kazaa, Audiogalaxy, Gnutella, and the all-notorious Napster. ...read more.

Looking at the big picture, we see the sales of legitimate music dipping to an all-time low, record companies going bankrupt and musicians, singers and bands struggling for survival. Well, this is just the start of a slippery slope effect, which would lead to many detrimental consequences. Since the respective industries do not having enough revenue, no money goes into Research and Development, leading to a drop in music quality and variety. Also, the industries would have to retrench people in order to survive, and many would thus suffer from unemployment. The impact on the artists are no less insignificant. In fact, on 18 May 2000, music piracy took its toll on another member of the music scene. Well-known artist, Kid Rock was driven to the mean streets from where he once came from, dying bankrupt and penniless in the gutter. However, all these tragic happenings are not unpreventable. To curb these problems, we have to look at the root of the problem, music piracy, and find ways to prevent it from taking place. Below are three ways in which music can be protected from piracy. ...read more.

Pirates also run the risks of massive fines and jail sentences if they are caught. In addition, popular singers and stars could help spread the message by being spokespeople for anti-piracy campaigns, reaching to the public, especially their fans, teaching them that copying a CD is as bad as stealing from a shop. On top of all these protective measures, the authorities could do their part by imposing stricter laws and harsher punishment for offenders, and having more rigorous enforcement. This means that there would be more surprise raids and even more proposals to shut down file-sharing programs as they are too, against the copyright laws. Last year alone, approximately 1,060 unauthorized peer-to-peer music servers, 28,000 Web and FTP (file transfer protocol) sites offering pirated music have been removed from the internet, Napster being one of them. One thing we are sure of, is that this battle between the music industry and the pirates may go on forever. Let us just hope that music piracy would not be as rampant, and even slowly decline as time goes by. With all these protection measures as mentioned above, it is likely that we would reach that level soon. Now, let us all face the music, and save the music! ...read more.