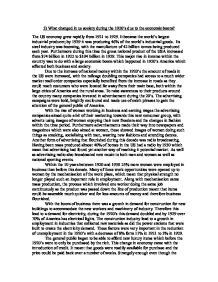 3) What changed in us society during the 1920's due to the economic boom? The US economy grew rapidly from 1921 to 1929. It became the world's largest industrial producer; by 1929 it was producing 46% of the world's industrial goods. Its steel industry was booming, with the manufacture of 42 billion tonnes being produced each year. Furthermore during this time the gross national product of the USA increased from $74 billion in 1922 to $104 billion in 1929. This major rise in income within the country was to do with a large economic boom which happened in 1920's America which affected both business and society. Due to the increase of national money within the 1920's the amount of roads in the US were increased, with the mileage doubling companies had access to a much wider market mail order companies especially benefited from the increase in roads as they could reach costumers who were located far away from their main base, both within the large cities of America and the rural areas. To raise awareness to their products around the country many companies invested in advertisement during the 20's. The advertising campaigns were bold, brightly couloured and made use of catch phrases to gain the attention of the general public of America. With the rise of women working in business and earning wages the advertising companies aimed quite a bit of their marketing towards this new consumer group, with adverts using images of woman enjoying their new freedom and the changes in fashion within the time period. ...read more.

It meant that goods were readily available for purchase and the price could be paid back over a number of weeks. Strangely enough even though the average working week fell from 47 to 44 hours due to the mechanisation of the workplace: American people were richer and more well off than before the 1920's because of a wage increase of an average of 10%., Items such as radios and labour saving devices such as vacuum cleaners and refrigerators were now to be commonly found throughout the homes of the American people During this decade of the 1920's there was a boom in the music industry as radio stations began broadcasting it. Jazz music grew greatly in popularity and led to a growth of music halls, clubs and musicals in the northern cities. With the new jazz craze, expectations of what women could wear changed as hemlines rose, however some people questioned what effect this change was having on America's morals. The women's clothes were being massed produced in factories and were being sold in chain stores such as sears and roebuck which had become the norm in large cities and sold to over a third of the market. There was also the invention of rayon; a cheap alternative to silk that soon became widely sold across the United States. As well as a variety of clothes made from new materials which were made into clothes of many different styles for women to enjoy wearing. ...read more.

The radio also created a new national habit of listening to the live sporting events that were being broadcasted. The economic boom led to many changes within the society of America. The increase in wealth and the introduction of mass production and labour saving devices, the latter of which led to a decrease in the working hours of the week meant that people had more leisure time to spend socialising in the new jazz clubs, partaking in the new fast dances such as the 'Charleston' or by going to watch sport such as baseball or American football. The young took great pleasure in this new social freedom they had received and the increase in the nation's wealth by going to the pictures and by travelling to other cities on the country's increased road systems, they also enjoyed the freedom from their parents that the decade brought. The 1920s were one of the most prosperous periods in American history due to the increase in economy and the nation's wealth. As a result the country's wealth reflected in every aspect of life but it mainly stood for the idea that American's should just to enjoy life and the new freedom they had received. The prosperity of the people influenced society, culture and industry all due to the boom of the economy during 1920's America. ...read more.