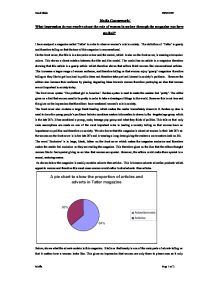 What impression do you receive about the role of women in society through the magazine you have studied?

Media Coursework:` What impression do you receive about the role of women in society through the magazine you have studied? I have analysed a magazine called 'Tatler' in order to observe women's role in society. The definition of 'Tatler' is gossip and therefore telling us that the tone of this magazine is conversational. On the front cover, the title is in a turquoise colour and the model, which is also on the front cover, is wearing a turquoise colour. This shows a direct relation between the title and the model. The model has an article in a magazine therefore showing that this article is a gossip article which therefore shows that editors think women like conversational articles. This increases a larger range of women audience, and therefore telling us that women enjoy 'gossip' magazines therefore telling us they like to get involved in public ideas and therefore take part and interest in society's problems. However the editors also increase their audience by placing degrading ideas towards women therefore portraying an idea that women are not important in society today. The front cover quotes 'The prettiest girl in America'. ...read more.

men in society as this shows that women need to look pretty in order to marry a man which in many cases is not true. This it therefore damaging a woman's view on life and makes women believe that in order to impress a man they need to be 'shallow'. The title of an article in 'Tatler' is called 'Places to snag a rich husband'. Alliteration is used in the phrase 'Places to snag...' to show powerfulness of how to 'snag' men. This phrase lowers the standards of women as according to the editiors, women need to marry rich in order to be happy. This again degrades women's role in society. The phrase is also catchy and informal which builds up a relationship with the reader and therefore the article has an influence over the reader. The article gives the readers' ideas of were to find a rich husband by making the person think using imaginative words. Each area of were to meet a rich man is subtitled and bold to help the readers glance over and see which area is suitable for them to find a rich husband. ...read more.

This effects women's role in society as people may think women are small minded which is not true as educational topics are not offered to them in this magazine. There have been some changes in society in comparison to older magazines as women are more free and comfortable in what they wear however it seems they dress sexual way in order to impress men and this is because, according to this magazine they would like to 'marry rich'. However women's ideas have evolved and women believe to marry for love and not for money. There are many negative aspects to this magazine as it lowers the standards of women in society by having large topics on fashion and beauty and not more educational topics such as books therefore making women look shallow. Many articles are also focused on men which give the impression that 'a woman is nothing without a man' and which is not true. However there are positive aspects such as keeping up to date with public ideas such as politics of which later, women can form their own opinions providing women with some sort of freedom to life. However, I believe that this magazine portrays women as narrow minded people who are constantly seeking for a rich husband. Swati Sinha 09/05/2007 Media Page 1 of 3 ...read more.