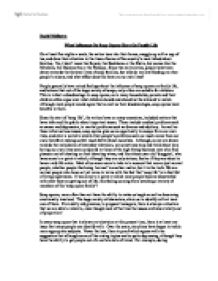 What Influences Do Soap Operas Have On Family Life

Ruchi Malhotra What Influences Do Soap Operas Have On Family Life On at least five nights a week, the nation tune into their boxes, snuggle up with a cup of tea, and draw their attention to the lives of some of the country's most talked about families. No, I don't mean the Royals, the Beckhams or the Blairs, but names like the Mitchells, the Duckworths or the Bishops. Since the early sixties, people have been drawn towards the fictional lives of soap families, but why do we love feeding on other people's misery, and what affect does this have on our own lives? People generally have mixed feelings about the influence of soap operas on family life, and believe that out of the huge variety of soaps, only a few are suitable for children. This is in fact a disadvantage to soap operas, as in many households, parents and their children often argue over what children should and should not be allowed to watch. Although most people would agree that as well as their disadvantages, soap operas have benefits to them. ...read more.

In every soap opera that is shown on television at this present time, there is at least one issue that many people can identify with. Over the years, storylines have begun to tackle more appropriate subjects. Never the less, there is proof which agrees with the suggestion that although some of the arising topics can be quite depressing, although they have the ability to get people out of a certain state of mind. For example, during situations such as divorce, women and men have both gained confidence within themselves to get over their situation. Recently, a storyline that has been included in most soaps, is the common but unfortunate situation of rape. Although we as a nation hate to admit it, rape is a very common and increasing problem, not to mention the underestimated damage that can be done to a person's physical and mental state as a result of it. Newspaper statistics show the growth in the percentage of young victim's who have found strength within themselves to ask for help. These articles also mention that they believe that this increase in numbers has been spurred from characters in soap operas dealing with the same problem. ...read more.

Eastenders is on." Although even I hate to admit it, even I find myself saying this on occasions. It is as if we have a permanent 'TV guide' engraved into our memories. We can remember what time Emmerdale is on, yet remembering birthdays is a 'no-go area'. It is funny that adults often say that children are glued to their screens nearly all the time, but people don't realise, that in fact parents are getting just as bad as their children, and this fact contributes to the reason why the British have generally become a nation of soap addicts. To conclude, it has to be said, that our lives are controlled by what we see, hear, and what we believe, but these beliefs come from small influences, and sometimes, we as humans don't realise when we have been made to think something. Soap operas, do in fact have a part to play in the way that we react to things, therefore, we know that we are influenced by soap operas, whether this influence is good or bad is a personal opinion. At the end of the day, our lives, although we do not realise this, is just one huge Soap Opera. ...read more.