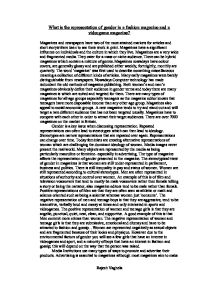 What is the representation of gender in a fashion magazine and a videogame magazine?

What is the representation of gender in a fashion magazine and a videogame magazine? Magazines and newspapers have two of the most attained markets for articles and short storywriters keen to see there work in print. Magazines have a significant influence on individuals and the culture in which they live. Magazines are a very wide and fragmented media. They cater for a mass or niche audience. There can be hybrid magazines which contain a mixture of genres. Magazines nowadays have colour covers, are generally glossy and are published either weekly, fortnightly, monthly are quarterly. The word 'magazine' was first used to describe something miscellaneous meaning a collection of different kinds of articles. Many early magazines were barely distinguishable from newspapers. Nowadays Computer technology has made redundant the old methods of magazine publishing. Both women's and men's magazines obviously define their audience in gender terms and today there are many magazines is which are suited and targeted for them. There are many types of magazines for all age groups especially teenagers as the magazine editor knows that teenagers have more disposable income than any other age group. Magazines also appeal to social economic groups. A new magazine tends to try and stand out and will target a rare different audience that has not been targeted usually. Magazines have to compete with each other in order to attract their target audiences. There are over 7000 magazines on the market in Britain. Gender is a key issue when discussing representation. Repeated representations can often lead to stereotypes which can then lead to ideology. Stereotypes are narrow representations that are repeated over again. Representations can change over time. Today feminists are creating alternative representations of woman which are challenging the dominant ideology of women. Media images never present the real world. Many objects are represented by the media as being particularly masculine or feminine- especially in advertising. ...read more.

The title of the magazine 'Marie Claire' is printed in bright orange small case letters. So that it can be seen from the grey background and it is in a light female-oriented colour. The front cover consists of 2 colour texts white and orange. Again brightly lit colours used to 'catch' reader's eye and also suggests female content. Whereas on the title page of the Playstation 2 UK magazine there are two dominant images of two famous footballers; the two footballers (Wayne Rooney and Ronaldinho) are promoting the videogame FIFA 2006 and appear to be in god-like light colour suggesting the game is holy and has a special prophecy. This image will attract football fanatics and Barcelona and Manchester United supporters. This will also attract audiences because of the popularity of the 2 football stars as they are seen as role-models for male football teenage fans. The background of the title page is in light blue and there is a stadium which is faded with a rainy effect. This denotes the image of the football stars as they are both related in football. This again adds to the heavenly effect of the football stars. The title 'Playstation 2' is printed in a normal white font with a little shadow. This makes the text blend in to the light colour images. The front cover of the videogame magazine consists of 3 colour texts white, black and red. The 'FIFA 06' text appears to be in strong bold font indicating masculine content. On the back page of the Playstation 2 UK magazine, Virgin Megastores are advertising six games from their stores. This denotes to the whole magazine as this is a videogame magazine. There are six thumbnails of the games which have a white frame each on a light blue background which also has a black frame thumbnail outline. This is done to make the games dominant images making them objects of importance. ...read more.

You can see that colour plays an important role for target audiences as helps the reader suggest what kind of content the magazine will have inside. Also the visual images will also help the reader know what kind of audience the magazine is targeted at as well as what social economic group is being targeted by the magazine for example Marie Claire is not being targeted for people of high economical status because of the use of small case letters. In conclusion to the representation of gender in the two magazines, men view the world differently than women do. Men are allowed to be more casual in their appearances; women have to have a more feminine look to get attention. This is showed in the videogame magazine where woman are simply there to be objectified and are s******y fragmented while men wearing casual clothing and are dominant in the videogame magazine as there are a lot of articles and content involving them. This also applies to Marie Claire magazine where women are still encouraged to look good and are fragmented in many of the adverts in the magazine. This influences the ideology that women need to look good to be feminine. Men are encouraged (just as women) to aspire to be like the role models they see in magazines. Men are finding it as difficult to live up to their media representations as women are to theirs. This is partly because of the increased media focus on masculinity. In the fashion magazine you rarely see men fragmented and when they are; they are fragmented with women. As Marie Claire encourages independence and confidence you will see that there are limited stories about men in the magazine. Marie Claire is intended to target young women who are confident, discerning, sophisticated and aware of the world around them. Magazines are often split along gender lines and it is difficult to find any popular magazine that crosses the gender divide. Over the past few years the representation of woman has improved. ?? ?? ?? ?? Rajesh Vaghela ...read more.