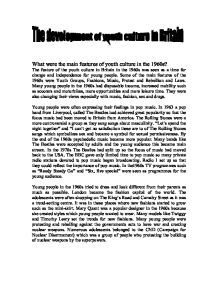 What were the main features of youth culture in the 1960s?

What were the main features of youth culture in the 1960s? The feature of the youth culture in Britain in the 1960s was seen as a time for change and independence for young people. Some of the main features of the 1960s were Youth Groups, Fashions, Music, Protest and Rebellion and Laws. Many young people in the 1960s had disposable income, increased mobility such as scooters and motorbikes, more opportunities and more leisure time. They were also changing their views especially with music, fashion, sex and drugs. Young people were often expressing their feelings in pop music. In 1963 a pop band from Liverpool, called The Beatles had achieved great popularity so that the focus music had been moved to Britain from America. The Rolling Stones were a more controversial a group as they sang songs about masculinity. "Let's spend the night together" and "I can't get no satisfaction these are to of The Rolling Stones songs which symbolizes sex and became a symbol for sexual permissiveness. By the end of the 1960s psychedelic music became more popular. Many bands like The Beatles were accepted by adults and the young audience this became main stream. In the 1970s The Beatles had split up so the focus of music had moved back to the USA. ...read more.

Others welcomed changes in the law especially with homosexuality, abortion and the Contraceptive pill. Young people also welcomed the changes because many had the opportunity to have disposable income, more spare time due to less working hours, leisure activities such as traveling and Timothy Leary encouraged the hippy culture. A model named Mary Quant became rich through the new fashion especially with the mini skirt. For many young people women the "Swinging Sixties" brought freedom. Some people reacted negatively because many were used to the conservative way of life. Many adults viewed the changes more negatively and thought that the young people were becoming selfish and irresponsible. Many adults saw the mini-skirt and the contraceptive pill as decline in moral standards. Many Whitehouse a school wanted more censorship. So she launched a national campaign and was founder of the Women of Britain Clean up TV campaign. She once quoted that "It became necessary because of the built-in censorship which, the BBC exerts against much which is good and clean in our national culture." This shows that she was very unhappy about the decline in moral standards. Some people reacted ambivalently or had no reaction at all. Many didn't seem to experience affluence of the "Swinging Sixties". ...read more.

They'd only want your autograph; and you could chat" this quote show that people could easily have access to big stars and you wouldn't need the amount of security you needed today. Law is also a key area that created a permissive society there are many examples such as; homosexuality and abortion ceased to be criminal offences in 1967, capital punishment ended in 1965, censorship laws became less strict e.g. "Lady Chatterley's Lover" could be read openly after ban was lifted in 1960s, shows like "Hair" and "Oh Calcutta" were allowed to show nudity and had a multicultural casts and fashions became more revealing e.g. mini-skirts and micro-skirts. These are some of the many areas which created a permissive society. How ever the contraceptive pill was not that widely available (Family Planning Clinics 1967, NHS 1974), many people disagreed with the changes and greater freedom of expression. One those many people was Many Whitehouse a school wanted more censorship. So she launched a national campaign and was founder of the Women of Britain Clean up TV campaign. She once quoted that "It became necessary because of the built-in censorship which, the BBC exerts against much which is good and clean in our national culture." This quote also shows that things are changing and she is not happy that the young generation is rebelling from the conservative way of life. Word Count = 427 ...read more.