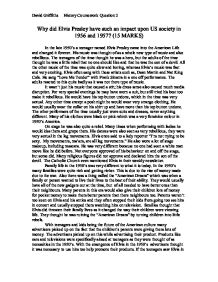 Why did Elvis Presley have such an impact upon US society in 1956 and 1957? (15 MARKS) In the late 1950's a teenager named Elvis Presley came into the American Life and changed it forever. His music was thought of as a whole new type of music and also rebellious. The teenagers of the time thought he was a hero, but the adults of the time thought he was a little rebel that no one should like and that he was the son of a devil. All the other music of the time was quite slow and boring, whereas Elvis's music was fast and very exciting. Elvis often sang with these artists such as, Dean Martin and Nat King Cole. He sang "Love Me Tender" with Frank Sinatra in a one off performance. The adults reacted to this quite badly as it was not there type of music. It wasn't just his music that caused a stir; his dress sense also caused much media disruption. For very special evenings he may have worn a suit, but still tried his best too make it rebellious. ...read more.

The Catholic Church even mentioned Elvis in their weekly newsletter. Family life in the 1950's was very different to what it is today. In the 1950's many families were quite rich and getting richer. This is due to the rise of money made due to the war. Also there was a thing called the "American Dream" which was when a family or person wanted to live their lives to the best of their ability. They would usually have all of the new gadgets out at the time, but of all needed to have better ones than their neighbours. Many parents in this era would also give their children lots of money for pocket money to make them better parents than there neighbours too. Parents weren't too keen on Elvis and his antics and they often stopped their kids from going too see him in concert and usually stopped them watching him on television. families thought that Elvis did threaten their family lives as it changed the way their children were viewing life. They thought he was ruining the "American Dream" by turning children into little rebels. ...read more.

If they thought he was good they would buy his records. If record sales were up for Elvis it would make him a lot of money and also could make more music due to the fact he knew he was liked by the public. Due to this I have come to the conclusion of why I think he had such an impact on US society in 1956 and 1957. I think he made such an impact due too the teenage life and how much money they had. The teenagers enjoyed Elvis's music because they thought it was fun and exciting. The rest of the artists at the time were quite boring and unexciting. Generally teenagers enjoy things there parents don't and also like nothing better too make there parents mad. Parents generally didn't like Elvis as they thought he was crude and very disturbing, often associated as 'Elvis the Pelvis' and 'The son of the Devil'. With money in American families, then more money given to teenagers. This making the amount of tickets in concert rise a dramatic account as the teenagers would buy the tickets. ?? ?? ?? ?? David Griffiths History Coursework Question 2 ...read more.