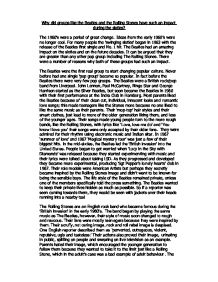 Why did groups like the Beatles and the Rolling Stones have such an impact during the sixties?

Why did groups like the Beatles and the Rolling Stones have such an impact during the sixties? The 1960's were a period of great change. Ideas from the early 1960's were no longer cool. For many people the 'swinging sixties' began in 1963 with the release of the Beatles first single and No. 1 hit. The Beatles had an amazing impact on the sixties and on the future decades. It can be argued that they are greater than any other pop group including The Rolling Stones. There were a number of reasons why both of these groups had such an impact. The Beatles were the first real group to start changing popular culture. Never before had one single 'pop group' become so popular. In fact before the Beatles there were very few pop groups. ...read more.

In 1967 'summer of love' and 1967 'Magical mystery tour' was just a few of their biggest hits. In the mid-sixties, the Beatles led the 'British invasion' into the United States. People began to get worried when 'Lucy in the Sky with Diamonds' was released because they started experimenting with music and their lyrics were talked about taking LSD. As they progressed and developed they became more experimental, producing 'Sgt Pepper's lonely hearts' club in 1967. Their role models were American Artists but perhaps they secretly became inspired by the Rolling Stones image and didn't want to be known for being the sensible boys. The life style of the Beatles remained private, unless one of the members specifically told the press something. The Beatles wanted to keep their private lives hidden as much as possible. ...read more.

The lyrics from 'Satisfaction' carried obvious sexual undertones and 'Brown Sugar' suggested drug taking which convinced parents that they were right about them and that they were not gentlemen like. Many teenagers saw them as role models because they were themselves but still what parent's thought was unacceptable. Most of the time they wore white costumes cut across their stomachs when performing at concerts which went with they bad-boy image. In 1962 parents didn't want their daughters to marry a Rolling Stone. Their style was a rocker and they were essentially working class and they hated fashion unlike The Beatles. The Rolling stones private life wasn't so private. They were followed by fans, press, photographers and reporters trying to get the latest stories. If there was an attack on their music or they made a surprise concert, it would be all over the front pages of newspapers and magazines the next day. ...read more.