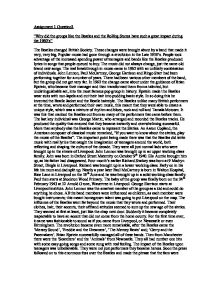 &quot;Why did the groups like the Beatles and the Rolling Stones have such a great impact during the 1960's&quot;

Assignment 1 Question2 "Why did the groups like the Beatles and the Rolling Stones have such a great impact during the 1960's" The Beatles changed British Society. These changes were brought about by a band that made it very, very big. Popular music had gone through a revolution in the Late 1950's. People took advantage of the increased spending power of teenagers and bands like the Beatles produced lyrics in songs that people queued to buy. The music did not always change, just the same old brand new songs. The real breakthrough in music came in 1962 with an unlikely combination of individuals. John Lennon, Paul McCartney, George Harrison and Ringo Starr had been performing together for a number of years. There had been various other members of the band, but the group did not get very far. In 1962 the change came about under the guidance of Brian Epstein, who became their manager and then transformed them from a talented, but undistinguishable act, into the most famous pop group in history. Epstein made the Beatles wear suits with non-lapels and cut their hair into pudding basin style. In so doing this he invented the Beatle Jacket and the Beatle hairstyle. The Beatles unlike many British performers at the time, wrote and performed their own music, this meant that they were able to create a unique style, which was a mixture of rhythm and blues, rock and roll and Tamala Motown. ...read more.

Their clothes, hair, their accents, their offhand attitudes seemed to sum up the new age of the sixties. They seemed at first at least, just like the chap next door. Suddenly it became completely respectable to have an accent that did not come from the home county. For the first time ever, it came was fashionable to sound as if you came from Liverpool, or Newcastle or even Birmingham. The revolution became even more remarkable, after the Beatles came the 'Mersey Sound', 'Freddie and the Dreamers', 'The Mersey Beats' and; 'Gerry and the Pacemakers'. Brian Epstein successfully managed all of these bands. Then from Manchester there were the 'Searchers' and the 'Animals' from Newcastle. They all had number one hits with some easy going songs and some sung with real feeling. The impact of the Beatles upon teenagers was unbelievable. They were not just performers they became heroes. Soon the press followed on to this enormous fuss over the Beatles and made the phrase that the fans were involved in Beatlemania. They represented the victory of youth over old age, of new against old. They were the sixties. A few girls went to the Beatles concert in Cheltenham and they got us screaming. I don't remember much about the concert, just the noise Teenagers were influenced by lyrics, which started to change their way of thinking and the message changed. ...read more.

ITV began to broadcast 'Ready Steady Go' and the BBC started 'Top Of The Pops'. Both were overnight success stories and these accounts finally showed popular music. If some aspects of the sixties appeared to challenge society and existing ideas, the hippie movement seemed to reject it altogether. Some people took the movement very seriously. Others tried to balance the hippie movement with other commitments, but most simply rejected it altogether. To many people the most worrying aspect of the hippie movement was the way that its followers seemed to abandon responsibility. The emphasis on 'Love and Peace', while harmless enough in many ways, came at the time when the west was being challenged by the Soviet Union. Not only did hippies appear to reject all forms of confrontation, but their behaviour suggested a weakening of society and the family in particular. In conclusion the impact of music in Britain changed the way we live today. The sixties took spending to a new level. Consumer goods became increasingly popular; this was mainly influenced by bands like the Beatles, who had their snapshot all over clothes to magazines. Lyrics had changed dramatically, and also the message had changed. Bands such as the Beatles promoted world peace. The Beatles helped boom Britain and this helped Britain to become a major force in pop music. I think the Beatles ended a new paragraph in British pop music. ...read more.