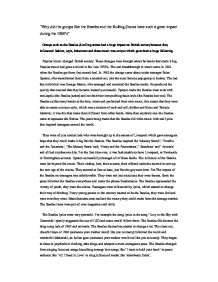 &quot;Why did the groups like the Beatles and the Rolling Stones have such a great impact during the 1960's&quot;

"Why did the groups like the Beatles and the Rolling Stones have such a great impact during the 1960's" Groups such as the Beatles & rolling stones had a huge impact on British society because they influenced fashion, style, behaviour and there music was unique which gave them a huge following. Popular music changed British society. These changes were brought about by bands that made it big. Popular music had gone evolved in the Late 1950's. The real breakthrough in music came in 1962 when the Beatles got there first record deal. In 1962 the change came about under manager Brian Epstein, who transformed them from a talented act, into the most famous pop group in history. The last key individual was George Martin, who arranged and recorded the Beatles tracks. He produced the quality that ensured that they became instantly successful. Epstein made the Beatles wear suits with non-lapels (the Beatles jacket) ...read more.

The influence of the Beatles went far beyond the music. Their clothes, hair, their accents, their offhand attitudes seemed to sum up the new age of the sixties. They seemed at first at least, just like the guy next door. For The impact of the Beatles on teenagers was unbelievable. They were not just musicians they were heroes. Soon the press followed the Beatles everywhere and made the phrase Beatlemania. The Beatles represented the victory of youth, they were the sixties. Teenagers were influenced by lyrics, which started to change their way of thinking. Every young person in the country wanted to be the Beatles, they were idolised were ever they went. Manufacturers soon realised the money they could make from the teenage market. The Beatles faces were put all over magazines and dolls. The Beatles lyrics were very powerful. For example the song lyrics in the song 'Lucy in the Sky with Diamonds' openly suggested the use of LSD and teens would follow them. ...read more.

Big changes started to happen as a result of these bands, TV and Radio began broadcasting non-stop music these were the most popular channels with teenagers. Radio Caroline and Radio London had huge following. They set the scene for the radio stations that were to come. They were designed to appeal directly to young people. Television reacted more quickly to the changing styles of music. ITV began to broadcast 'Ready Steady Go' and the BBC started 'Top Of The Pops'. Both were overnight success stories and these accounts finally showed popular music. The impact of music in Britain changed the way we live today. The sixties took spending to a new level. Consumer goods became increasingly popular; this was mainly influenced by bands like the Beatles, who had their photos all over clothes to magazines. Lyrics had changed dramatically, and also the message had changed. Bands such as the Beatles promoted world peace. The Beatles helped boom Britain and this helped Britain to become a major force in pop music. The Beatles ended a new paragraph in British pop music. ...read more.