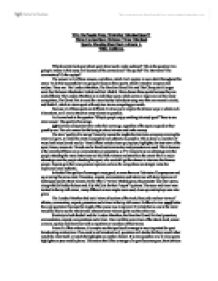 Why does televised sport attract sport attract such a wide audience? This is the question I am going to answer in this essay. Is it because of the convenience? The quality? The interviews? The commentary? Or the replays?

Why Do People Enjoy Watching Televised Sport? Make Comparisons Between Three Televised Sports, Showing How Each Attracts A Wide Audience. Why does televised sport attract sport attract such a wide audience? This is the question I am going to answer in this essay. Is it because of the convenience? The quality? The interviews? The commentary? Or the replays? The answer is all of these reasons, and others, which I will explore in more detail throughout this essay. To do this successfully I am going to focus on three sports, which I intend to compare and analyse. These are: The London Marathon, The Brazilian Grand Prix and The Champion's League semi-final between Manchester United and Real Madrid. I have chosen these sports because they are each different; The London Marathon is an individual sport, which covers a large area and has many competitors; The Grand Prix is raced for a team but by individuals using very fast cars around a circuit; and football, which is a team sport with only two teams competing per match. Because all of these sports are different, it allows me to explore the diverse ways in which each is broadcast, as all aim to attract as many viewers as possible. As I come back to the question 'Why do people enjoy watching televised sport?' there is one clear answer: The quality of coverage. All television companies try to make their coverage, regardless of the sport, as good as they possibly can: The sole reason for this being to attract viewers and make money. The term 'quality of coverage' basically means the lengths the television company covering the event will go to, to make the event as enjoyable and authentic as possible. This is done in a number of ways: both visually and aurally. Visual effects include close-ups, replays, highlights, the best view of the sport, timers, scores etc. Crowds can be heard and commentary and presenters are used. ...read more.

Luckily, because all the roads are blocked off, it is possible to follow the athletes using cameras. This is most often carried out with the use of motorbikes: they don't take up much space and offer a smooth ride for the cameras, so there isn't too much jolting about. At the beginning of the main race (with the 'fun' runners) there is an aerial shot of all the participants, which gave the audience an idea of the scale of the marathon. In the professional competitors' race there were separate groups of people running at different pace. Most images were biased: they were of British runners or the favourites to win. When the women's race began, nearly the whole race was focused on Paula Radcliffe, who is British and was aiming to break the women's world record for the quickest time to complete the marathon. So much attention was paid to her because she tried to break the same record in a previous London Marathon, but she failed. She then became one of the world's most successful long-distance runners, so a lot of pressure was on her to break the record, especially because she's British. All of the concentration on Paula helped to create tension: "would she win?" "Would she break the record?". This was brilliant for the BBC, who covered the event, as it created enough tension to keep most viewers entertained for the entire race. The motorbike cameras used showed either a front, side or rear view of runners, although it was mostly a view diagonally in front of the person. This meant that the audience were able to see the competitor's expressions, showing how the sports people were feeling. While the cameras were focusing on Paula Radcliffe, additional tension was built by showing details of how long it had taken her to run each mile. This worked by letting the audience know if she was improving or not and allowed them to make an estimate of her finishing time. ...read more.

commented on how she must be feeling-"It's really beginning to hurt now", "She must be feeling the pain" Once Paula had finished, the presenter went over to her held an interview with her. This is this case with most winners or important players in sports and it's because the television companies really want to attract viewers and however good the view people at the event receive, or however much fun they had it is highly unlikely they will ever have the chance to interview a star from the event. The stars can tell everyone what it was really like, and what they thought of certain incidents. There are lots of camera shots of the winners, but in the Man-U - Real Madrid game it was also possible to see the teams shaking hands and swapping shirts. So why do people enjoy watching televised sport? I think it's all down to the quality of coverage: the use of cameras, sound, replays, commentary, close-ups, interviews with stars, and expert opinions. All of this, in no small way helps to attract an audience. It's the same as any television show: if you find it boring, you won't watch it, so it's up to the television companies to make the sports as attractive and interesting as they possibly can. Additionally, the way in which people watching the sport on television, who usually get to view sport for free, have many more luxuries and features than the spectators at the event who pay dramatically influences the reasons why people enjoy to watch televised sport. Football, running and motor racing all make an effort to be as dramatic and exciting as possible solely to attract viewers, all their techniques seem to work, so they must be effective! Which would you prefer: standing outside on your own in the pouring rain, hardly able to see a thing and paying �20....or.... staying in the comfort of your own home, alone or with friends, with the best view possible and it's free!? Exactly! ...read more.