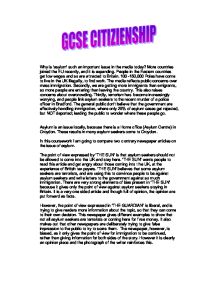 Why is asylum such an important issue in the media today?

Why is 'asylum' such an important issue in the media today? More countries joined the EU recently, and it is expanding. People in the Eastern countries get low wages and so are attracted to Britain. 100-150,000 Poles have come to live in the UK illegally, to find work. The media reflects public concerns over mass immigration. Secondly, we are getting more immigrants than emigrants, so more people are entering than leaving the country. This also raises concerns about overcrowding. Thirdly, terrorism has become increasingly worrying, and people link asylum seekers to the recent murder of a police officer in Bradford. The general public don't believe that the government are effectively handling immigration, where only 25% of asylum cases get rejected, but NOT deported; leading the public to wonder where these people go. Asylum is an issue locally, because there is a Home office (Asylum Centre) in Croydon. These results in many asylum seekers come to Croydon. In this coursework I am going to compare two contrary newspaper articles on the issue of asylum. ...read more.

These phrases make the reader angry if they think that they are paying taxes and asylum seekers are living in luxury hotels for free using their money; making them feel it is unfair. The language used by 'THE GUARDIAN' is more sophisticated than 'THE SUN'; the words used have more complex meanings whereas 'THE SUN' uses simple language to make its points. This shows that the readership of each paper is very different; where 'THE GUARDIAN' is read by people who are typically more educated then those of 'THE SUN'. Its uses language such as "tolerance", "ethnicity" and "liberal progressives", which are effective because they make the reader feel that the issue is not in such a dangerous position as others make out. 'THE SUN' uses other techniques to persuade its readers, such as photos and graphs. These are effective because the images used to make you want to read the topic and you can imagine what 'THE SUN' is talking about when looking at the pictures. ...read more.