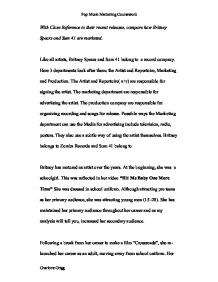 With Close Reference to their recent releases, compare how Britney Spears and Sum 41 are marketed.

With Close Reference to their recent releases, compare how Britney Spears and Sum 41 are marketed. Like all artists, Britney Spears and Sum 41 belong to a record company. Here 3 departments look after them: the Artist and Repertoire, Marketing and Production. The Artist and Repertoire( a+r) are responsible for signing the artist. The marketing department are responsible for advertising the artist. The production company are responsible for organizing recording and songs for release. Possible ways the Marketing department can use the Media for advertising include television, radio, posters. They also use a subtle way of using the artist themselves. Britney belongs to Zomba Records and Sum 41 belong to Britney has matured as artist over the years. ...read more.

Her album cover featured her sitting on a stool, crouching forward. With the low cut top she was wearing, this position revealed quite a lot of Britney's chest area. She held wrists facing the camera. This suggests she was flirting with men. She was wearing a crucifix necklace, which suggests she is trying to maintain her virginal reputation that she previously had. Heavy Eye-Makeup is worn, similar to that of Brigitte Bardot, a 60's icon. This attracts men as she is shown to take pride in her appearance. Her hair is tousled over her chest, hinting that she isn't as clean cut as previously thought. The back cover is featuring Britney's face repeatedly reflected over the cover. ...read more.

Their album features a more personal touch with what appears to be handwritten track lists and Polaroid photos. This makes the audience feel as though the album has been made for them personally. Dark colours are used, this reflects the bands image of a "hard" rock band. Sum 41's image has not changed as much as Britney's. In conclusion, Britney is marketed more two audiences where Sum 41 appear to be marketed for the same type which is skaters and rock fans. Britney appears to be more interested in her fans, while Sum 41 aren't really bothered what anyone thinks and are more concerned making music and having fun. Finally, record companies are responsible for the artists image. Record companies use media for advertising and will have too as the public opinion of artists change when the media portrayal of them changes. ~~~~~~ Pop Music Marketing Coursework Charlotte Grigg ...read more.