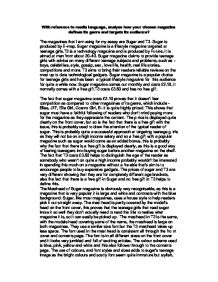 With reference to media language, analyse how your chosen magazine defines its genre and targets its audience?

With reference to media language, analyse how your chosen magazine defines its genre and targets its audience? The magazines that I am using for my essay are Sugar and T3. Sugar is produced by E-map. Sugar magazine is a lifestyle magazine targeted at teenage girls.T3 is a technology magazine and is produced by Future, it is aimed at men from about 20-40. Sugar magazine claims to provide teenage girls with advice on many different teenage subjects and problems, such as- boys, celebrities, style, gossip, s*x, love life, health, real life stories, competitions and more. T3 aims to bring their readers reliable reviews on the most up to date technological gadgets. Sugar magazine is a popular choice for teenage girls and has been a typical lifestyle magazine for this audience for quite a while now. Sugar magazine comes out monthly and costs �2.10, it normally comes with a free gift.T3 costs �3.50 and has no free gift. The fact that sugar magazine costs �2.10 proves that it doesn't fear competition as compared to other magazines of its genre, which include- Bliss, J17, Elle Girl, Cosmo Girl, B- it is quite highly priced. This shows that sugar must have a faithful following of readers who don't mind paying more for the magazine as they appreciate the content. The price is displayed quite clearly on the front cover, but so is the fact that there is a free gift with the issue, this is probably used to draw the attention of the typical reader of sugar. ...read more.

One way is that Rachel Stevens produces the type of music that the audience of Sugar magazine would listen to and therefore fits in with the mode of address. As she probably has a lot of teenage fans who are female they would be the target audience of Sugar and the fact that there was an interview with Rachel Stevens would encourage them to buy the magazine if they were fans of her music. Though teenage girls don't necessarily have to be fans of Rachel Stevens' music to be influenced by this image of her on the magazine, as they may want to get her look and could presume that in buying sugar magazine they too could achieve her style. Rachel Stevens is also looking very confident and happy on the magazine cover and girls could find this an aspirational image and buy the magazine so they don't only look as good as her but so that they feel as happy and confident in themselves as she does, this is a very important issue with teenagers who often link confidence with popularity, so there are a lot of messages in the choice of model for the front cover in the way that it defines genre and targets audience. The model on the cover of T3 is a very attractive women posing with a mobile phone in her hand, in T3 there are no write ups about this women and she is there ...read more.

"its only rock and roll" in the corner of the page there is a minimised image of the front cover of the magazine, the title is easily read so that the person viewing the advertisement can go out and actually buy the product. Both articles would be probably attractive to the readers of each particular magazine, but probably more so for the article in sugar as most teenage girls would be influenced by the aspirational image of a girl who attracts male attention. Also T3 is only a gadget magazine so the readers do not necessarily have to be into rock and roll music so this advertisement may not be that successful. The advertisements in both magazines reflect the genre of the two; this also affects the target audience, who would probably all be attracted to similar advertisements within magazines. All in all I would say that Sugar magazine clearly defines its genre and targets its audience. It fits in well with other teenage magazines on the shelf and this is why it is such a popular choice. With the use of many combined techniques, including- choice of colour, choice of font, choice of model, layout, content and overall style, it is a magazine that appeals directly to teenage girls. I think that T3 also targets its audience well and although they use their techniques in very different ways they use similar ideas to help attract the specific audience to their magazine. ...read more.