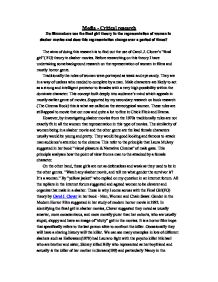 averlibleMedia - Critical research Do filmmakers use the final girl theory in the representation of woman in slasher movies and does this representation change over a period of times? The aims of doing this research is to find out the use of Carol .J. Clover's "final girl"( FG) theory in slasher movies. Before researching on this theory I have undertaking some background research on the representation of women in films and mostly horror genre. Traditionally the roles of women were portrayed as weak and eye candy. They are in a way of useless who needed to complete by a man. Male characters are likely to act as a strong and intelligent protector to females with a very high possibility within the dominate character. This concept built deeply into audience's mind which appeals in mostly earlier genre of movies. Supported by my secondary research on book research (The Cinema Book) this is what we called as the stereotypical women. These rules are still appeal to movie that out now and quite a lot to fine in Chick Flick and Drama. However, by investigating slasher movies from the 1970s traditionally rules are not exactly fit in all the women that representation in this type of movies. ...read more.

Suggested in my forum reply and "They are there to be kill" by a male in my focus group. Also with my own opinion is their action makes the audiences think they deserved to be kill terribly. This refers to Nancy Kyle (as Annie Brackett in Halloween) who purse Laura to go out at night and Draw Barrymore(as Casey Becker in scream) who flirting with the killer through a phone. For further research of this project I investigated base on the changes of the data that I found on the upward paragraphs. I suggested to my questionnaire, interviews, forum debating and also the focus group about their opinions on the changes of these representation of women in slasher movies that they suggested to me above. The answers that they reply to me are the following. I realize that changes would occur within their interests (as to the audiences interest) and also to the society. " As women got more and more equal right in society, they got more and more equal right in film" by Mr. Wightman in my focus group. women are now taking much more dominated role in movies which is totally different from they 60s and earlier 70s. ...read more.

This is an interesting view which lead to an argument between male and female in my focus group about the right on the domination of women in movies. The males debated that it is risky to suddenly flip the traditional role of gender around and make a woman in the lead role on a movie. As to this idea the females argued back with "introduce a woman happening do the same thing as the man used to do they should because this is what we expected to see." In a way to "show off that women can handle better than the boys" However both of they agreed with hoping to look for a very different kind of women representation in the coming movies and bored with the repetitive pattern of slasher and predictable ending of the final survivors. At lasts my research lead to a think of predicting the future slasher trend within the film industry. I don't have enough data to forecast the future change of women characters in a slasher and to identify the world expectation of the coming type of female represent in a slaher but I think it will be interesting when filmmakers are mixing the traditional through with new idea to form a new concept of women representation. I am looking forward to this, who will know the future! ...read more.