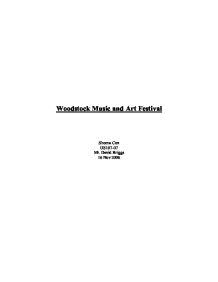 Woodstock Music and Art Festival. Who started such a party? Why was it started? Did the promoters believe it would turn out quite like it did? What was the real Woodstock experience actually like?

Woodstock Music and Art Festival Sheena Cox US107-07 Mr. David Briggs 16 Nov 2006 Woodstock started out as just a big bash and ended as a once-in-a-life-time occurrence. The original Woodstock-goers share a bond and uniqueness that will be hard, if not impossible, for anyone to ever reproduce. Who started such a party? Why was it started? Did the promoters believe it would turn out quite like it did? What was the real Woodstock experience actually like? Four very young and very different men sponsored Woodstock: John Roberts, Joel Rosenman, Artie Kornfield, and Michael Lang. John Roberts was the oldest, at age twenty-six. Being heir to a drugstore and toothpaste manufacturing company, he supplied most of the money. In 1966 he met Joel Rosenman, who had just graduated from Yale Law School and was playing guitar for motel lounge bands in the Long Island area. By 1967 they shared an apartment and an idea for a screwball comedy show about two guys with unlimited resources who are always getting involved with crazy innovations. While looking for new ideas to help the show, they essentially became the characters of it. ...read more.

the festival.6 Elliot Tiber, owner of El Monaco (a resort on White Lake), read about Woodstock getting tossed out of Wallkill and realized that he had what Woodstock Ventures needed, a permit to hold a music festival in Bethel, New York. He contacted Lang who immediately came out to El Monaco. However, the resort was only about fifteen acres and they needed a lot more land than that. Tiber then thought of his friend, Max Yasgur, who owned a massive dairy farm right outside of Bethel. On July 20, 1969, Woodstock Ventures agreed to rent six hundred acres of the farm for seventy-five thousand dollars. Bethel residents started to read about Wallkill's worries about the festival and they started to feel like the concert was pushed on them. George Cobb and other small landowners advised Bethel town attorney, Fredrick Schadt, and building inspector, Donald Clark, not to approve their permits.7 The landowners pressed charges against Woodstock Ventures to get them to increase security and sanitation levels. After several meetings and payoffs the court released a statement saying, "The differences between the parties have been resolved. ...read more.

At that time Country Joe and the Fish came on, followed by Ten Years After, The Band, Blood Sweat and Tears, Johnny Winter, Crosby Stills Nash and Young, The Paul Butterfield Blues Band, and Sha-Na-Na. Last but not least, on Monday, August 18, 1969, around 8:30am Jimi Hendrix walked on stage for an unforgettable ending. He played to a mere forty thousand people and officially ended the Woodstock Music and Art Fair at 10:30am.13 Woodstock was more than just an art and music festival; it was the capstone of an era and a cultural jungle. People of all sorts attended; Vietnam vets, black militants, anti-war protestors, rednecks, anti-gays, ban drug advocates, pro-government advocates, legalize drug advocates, gays/lesbians, and anti-government advocates. Although it might have seemed to be the start of a civilization collapse, it actually became the site of a mini-nation, in which minds were open and love was free. The people who came together on August of 1969 created an unforgettable landmark of the twentieth century, which changed the world forever. Gary Proud, an original Woodstock attendee, said, "You can shake off the mud, the music will fade, but you can never forget the emotions. ...read more.