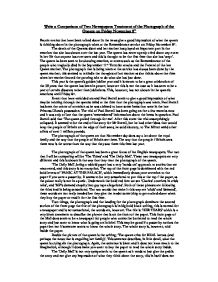 Write a Comparison of Two Newspapers Treatment of the Photograph of the Queen: on Friday November 8th

Write a Comparison of Two Newspapers Treatment of the Photograph of the Queen: on Friday November 8th Recent events that have been talked about in the news give a good impression of what the queen is thinking about in the photograph taken at the Remembrance service on Friday November 8th. The death of the Queens sister and her mother has played an important part in the emotion that she has shown over the last year. The queen has never openly cried about any event in her life that anyone has ever seen and this is thought to be the first time that she has 'wept'. The queen ha been seen to be showing emotion, at events such as the Remembrance of the people who tragically died in the September 11th Terrorist attacks and the Funeral of the late Queen mother. The photograph that is being taken at the service has always been done by the queen mother; this seemed to rekindle the thoughts of her mother as she thinks about the time when her mother braved the pouring rain to do what she has just done. ...read more.

The two that I will be comparing will be 'The Times' and 'The Daily Mail'. These two newspapers are very different and this is shown in the way that they treat the photograph of the queen. 'The Daily Mail', being a tabloid paper has a very 'hands on' approach to stories that are uncovered, and this story is no exception. The top of the front page is dominated with the red bold letters of 'PANIC AT THE PALACE', which immediately draws your attention to the paper if you were a passer by. It seems to be very sensational to put this at the top f the paper, as the palace really is not in a panic. Underneath the bold red font we see 'Charles' courtiers in crisis talks', and 'MP's demand enquiry into gay r**e allegations'. Both of these phrases are following the titles lead in being sensational. The two words that make it this way are 'crisis' and 'demand', these words are not really needed but they give the reader something to get excited about when they buy the paper or read it for the first time. ...read more.

This kind of arrangement of the paper does not attract people to the paper as much as 'The Daily Mail' does, although the eye is somewhat drawn to the photograph in the middle of the paper at the top. Above the photograph is the title for the photograph; 'the quiet moment when it all became too much to bear'. This sentence seems to sum up what is happening in the photo and a little information that makes you want to read the story that follows the photograph underneath. The story underneath the photograph is a commentary on the service of remembrance and it gives a detailed account of what the queen went through as she inspected gravestones and laid a cross down to remember those who fell in the wars of the world. r**e allegations are not mentioned in the story until the last paragraph of the story on the front page, and only then is it mentioned in brief just saying that the royal family denied the allegations of male r**e. ...read more.