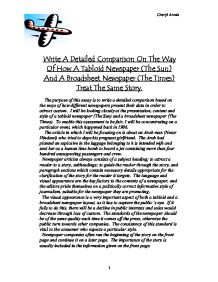 Write a detailed comparison on the way of how a tabloid newspaper (The Sun) and a broadsheet newspaper (TheTimes) treat the same story.

Write A Detailed Comparison On The Way Of How A Tabloid Newspaper (The Sun) And A Broadsheet Newspaper (The Times) Treat The Same Story. The purpose of this essay is to write a detailed comparison based on the ways of how different newspapers present their data in order to attract custom. I will be looking closely at the presentation, content and style of a tabloid newspaper (The Sun) and a broadsheet newspaper (The Times). To enable this assessment to be fair, I will be concentrating on a particular event, which happened back in 1986. The article in which I will be focusing on is about an Arab man (Nezar Hindawi) who tried to dupe his pregnant girlfriend. The Arab had planted an explosive in the luggage belonging to his intended wife and sent her as a human time bomb to board a jet containing more than four hundred unsuspecting passengers and crew. Newspaper articles always consists of a subject heading; to attract a reader to a story, subheadings; to guide the reader through the story, and paragraph sections which contain necessary details appropriate for the clarification of the story for the reader it targets. The language and visual appearance are the key factors to the contents of a newspaper, and the editors pride themselves on a politically correct informative style of journalism, suitable for the newspaper they are promoting. ...read more.

The Times is able to provide more detailed stories, as it is longer and wider than The Sun. Broadsheets are often carried under the arm, as they are too big to store in a handbag or suitcase. The Arab rat article was placed at the top of the page in a tiny space. The other information included on the page is an advertisement for Swindon Enterprise, a cartoon caption and articles such as 'England Down And Out, Pledge On Terror Even At Cost Of Life, Thousands Seek To Flee Tripoli'. Within the space provided for this story the editor inserted a small picture of the Arab, with a caption just beneath it, a headline, a sub headline, and the text. The picture in The Times used for the article was the same picture as the editor of the Sun had used. The only difference between the two photographs is the size. There are obvious similarities on the front page of the Sun and The Times as there is vital information that has to be included not only for the benefit of the readers, but also for the benefit of the companies. Both types of newspapers used black and white ink only, they both noted the date and price and most importantly they both displayed the name in which they are referred to as a company. ...read more.

I also like how 'her lover kissed her goodbye - then fled' because again this shows that the girl was innocent and unaware. I think that line was very powerful as it describes the rat he was in their relationship too. according to the text 'the man had been prepared to send her and their baby to certain death'. The girl must have felt betrayed,unlovedand scaredafter the trauma she had to tackle. The guilty being was the terrorist, which was the 35-year Nezar Hindawi. The writer made him sound evil, by including phrases and describing words like 'WANTED' (the headline), which gives the impression of a master criminal. ' Arab rat aimed to send his pregnant girlfriend and 400 passengers to their deaths' explains within itself that he was selfish and evil minded. Throughout the text he is described as an 'Arab terrorist' and 'Arab Rat' as they are words of filth that describe him perfectly. Through producing this essay I have noticed that tabloid newspapers and broadsheet newspapers may display the same stories but the construction of them are quite different. I have discovered that the Sun is more of a quick read newspaper, which uses easy vocabulary and appears to use the space liberally, while The Times happens to be a very detailed, factual newspaper. The paper I prefer to read is the type of paper that comes in a tabloid form. The reason why I prefer the Tabloid rather than the Broadsheet is because of the simple grammar they use. Cheryl Arnak 1 ...read more.