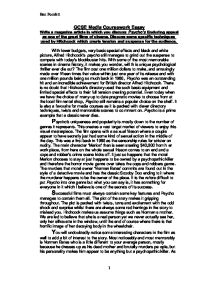 Write a magazine article in which you discuss Psycho's Enduring appeal as one of the great films of cinema. Discuss some specific techniques used by Hitchcock which create tension and suspense for the audience.

GCSE Media Coursework Essay Write a magazine article in which you discuss Psycho's Enduring appeal as one of the great films of cinema. Discuss some specific techniques used by Hitchcock which create tension and suspense for the audience. With lower budgets, very basic special effects and black and white picture, Alfred Hitchcock's psycho still manages to grind out the suspense to compete with today's blockbuster hits. With some of the most memorable scenes in cinema history, it makes you wonder, will this unique psychological thriller ever die out? The film cost one million dollars to make, and amazingly made over fifteen times that value within just one year of its release and with one million pounds being so much back in 1960, Psycho was an outstanding hit and an incredible achievement for British director Alfred Hitchcock. There is no doubt that Hitchcock's directory used the such basic equipment and limited special effects to their full tension creating potential. Even today when we have the choice of many up to date pragmatic movies to choose from at the local film rental shop, Psycho still remains a popular choice on the shelf. It is also a favourite for media courses as it is packed with clever directory techniques, twists and memorable scenes to comment on. Psycho is a prime example that a classic never dies. Psycho's uniqueness and popularity is mostly down to the number of genres it represents. This creates a vast target market of viewers to enjoy this visual masterpiece. ...read more.

As for the other main character Marion, she was the 1960's equivalent to a model, although this opinion has died down a bit, as her appearance is a bit unfashionable to today's standards. Comparing to today's standards, the special effects may not be as visually realistic but what makes it still compete in tension is the realism of the storyline and that this could happen to you. Today, the story lines from films often contain things like aliens invading the planet so us humans get rid of them by shooting them with laser beams, and admittedly the special effects make this look realistic but you never walk away feeling effected by it as things like this simply do not happen. However, Norman Bates was based on a true character and everything that happens in psycho, happens in real life, from murder to affairs. In fact, I remember going to a Hitchcock theatre on holiday and watching the shower scene from Psycho and secretly the reason I didn't have a shower in the hotel for two weeks was if I'm being honest, because I was scared and not because I wanted a bath. This is why psycho lives long in the memory of those who dare to watch it. Hitchcock uses incredibly clever directory techniques to absorb the audience into another world. He uses symbolism and irony that the audience unconsciously take in such as the birds of prey in Norman's office. Norman claims his mother is "as harmless as one of those stuffed birds" and as we discover, she has in fact been preserved ...read more.

The stabbing of the Melon creates a gruesome and I assume a realistic sound. After many slashes, Norman casually walks away whilst Marion grabs onto the shower curtain in a desperate last gasp attempt to save herself but her sheer weight is too much for the hooks to take and she falls back down. The camera then concentrates on all the blood going down the plughole to give a ghastly ending to the attack. The camera then cuts so it is focused right on Marion's eye which despite her being dead, still looks in shock, then the camera slowly spirals away from her to show the lasting image of her dead body on the floor. The shocking thing about it is the unexpectation of it. Norman seemed to like Marion and showed no signs and had no reason to harm her, but as we find out, it is the mother side of him which drove him to commit this murder. His mother would not have been happy with him having another woman other than her in his life so through sheer jealousy; the mother side of him forced him to murder her. I personally follow the opinion of most others in that psycho is a classic film and really do give credit to Alfred Hitchcock for using the bare basics of cinematic tools to create one of the greatest ever films. My opinion suggests that Hitchcock's directing was the difference between this version of Psycho and the newer version that was made and was what made it a success. ?? ?? ?? ?? Ben Pomlett 1 ...read more.