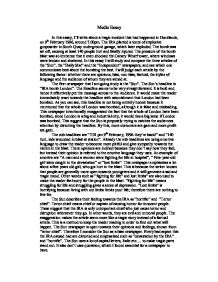 Write about a tragic incident that had happened in Docklands, on 9th February 1996, around 7.00pm.

Media Essay In this essay, I'll write about a tragic incident that had happened in Docklands, on 9th February 1996, around 7.00pm. The IRA planted a tonne of explosive gunpowder in South Quay underground garage, which later exploded. The b**b was set off, causing at least 140 people hurt and fatally injured. The pressure of the b**b blast was so immense that it even shocked the Canary Wharf tower, where windows were broken and shattered. In this essay I will study and compare the three articles of the "Sun", the "Daily Star" and the "Independent" newspapers, and see which one communicate best about the bombing the best. I will judge each article by the following factor: whether there are opinions, bias, non-bias, factual, the styles of language and the audience of whom they are aimed at. The first newspaper that I am going study is the "Sun". The Sun's headline is "IRA b**b London". The Headline seems to be very straightforward. It is bold and hence it effectively put the message across to the Audience. It would make the reader immediately react towards the headline with astonishment that London had been bombed. As you can see, this headline is not being entirely honest because it mentioned that the whole of London was bombed, although it is false and misleading. This newspaper intentionally exaggerated the fact that the whole of London have been bombed, since London is a big and industrial city, it would rise a big issue if London was bombed. ...read more.

The Daily Star is a very expressive towards how they feel for the IRA and they uses impulsive and strong words such as "cowards" and "evil terrorist" to describe the IRA. These words portray that the IRA are unpleasant, heartless, evil and nonnegotiable people who just want to cause trouble. The purpose of expressing their idea in such a strong language is to convince and influent the reader to criticise and hate the IRA as they do too. Again it is obvious that this I a bias newspaper. The Daily Star begins to emphasize about five years old little girl who suffered facial injuries as the consequence of the IRA bombing. It tries to stress out that a little girl's beauty is ruin. This makes the IRA seems heartless and evil for what they had done which it drives the audience crazy especially Londoners. Terry Walker, who works near by Canary Wharf said, "The Whole of front of three South Quay buildings are out of this station is wrecked". This newspaper is not formal because unimportant people was quoted and yet it even might be made up, therefore the Daily Star is not reliable and reinsuring. The Daily Star is a bias newspaper because it is over expressive with their opinions and it is a distorted newspaper. The "Independent" headline line is " The cease-fire is over: IRA bomber blast London". The headlines uses alliterative language, "bomber blast", in order to catches the audience attention. ...read more.

The several facts that were given in each newspaper have all different fact. For example: The Sun said that "140 were hurt", the Daily Star said that "150 were hurt" and the Independent said the "34 were hurt". Which one of these sources is real? . I personally favour for the Independent. My reasons for this are that the Independent specifically mentioned, "34 were hurt in the hospital" and "illtensive care". While the other two newspapers did not say that the figure of 140/150 were in hospital or are in illtensive care, therefore I assume they are both exaggerating people who were hurt in the blast, in order to make it sounds like a big issue. I am in favour for non-bias (doesn't share opinion) newspaper because it is factual. Through studying, I found that bias newspapers are the Sun and the Daily Star, and the non-bias is the Independent. Bias newspaper normally exaggerates their point too much and it is not good to rely upon, therefore I think the Independent is reliable. I have finally decided that the best newspaper to communicate the bombing of Dockland is the Independent newspaper. I have chosen this newspaper for a numbers of reasons. First of all, it is a non-bias newspaper, which it is reinsuring because it is not taking sides. The fact is not distorted unlike the Sun and the Daily Star. It goes through detail of what had happened by using factual language not emotive language. Finally it quotes from important people like President Clinton and John Major to make it seems more formal, professional and quality. ...read more.