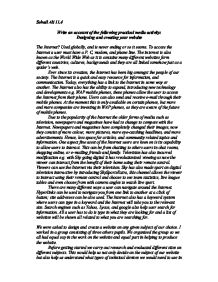 Sohail Ali 11.4 Write an account of the following practical media activity: Designing and creating your website The Internet? Used globally, and is never ending or so it seems. To access the Internet a user must have a P. C, modem, and phone line. The internet is also known as the World Wide Web as it is contains many different websites form different countries, cultures, backgrounds and they are all linked somehow just as a spider's web. Ever since its creation, the Internet has been big amongst the people of our society. The Internet is a quick and easy resource for information, and communication. Today, everything has a link to the Internet in some way or another. The Internet also has the ability to expand, introducing new technology and developments e.g. WAP mobile phones, these phones allow the user to access the Internet from their phone. Users can also send and receive e-mail through their mobile phones. At the moment this is only available on certain phones, but more and more companies are investing in WAP phones, as they are aware of the future of mobile phones. Due to the popularity of the Internet the older forms of media such as television, newspapers and magazines have had to change to compete with the Internet. ...read more.

We used a cool, street style approach to our website as the majority of people visiting the website were expected to be young. We used dominant colours like black, red, and fire colours as this website was aimed to attract passionate football fans that see football as a dominant sport. Keeping with cool street look we added instrumental in the background to keep our audience interested, the instrumental was from the hip hop genre which usually known for its street, real, cool image this went perfectly with image we wanted to put across. We also used eye catching effects like the title of the website on fire; we thought that this would be effective in keeping the audience interested and also intrigue them. Most of the sub titles and links were typed up in capital letters in red to catch the audience's eye. We chose to use easy to read language so people would not have any problems in reading the text. A lot of the language used is ordinary and casual because we knew different age groups would visit the site. The real indifference of language was in the title of our website 'On YA head' the reason for not using correct English spelling was because the phrase is commonly said this way. ...read more.

The reason most websites are successful is because a majority are attached to a big names or are rare and different. I feel that if we had advertised and added our site as a link on other sites then our website would have even more successful in attracting our target audience. After designing and creating our own website I have learnt that it is much harder than it seems at first. It is very time consuming, we had so many ideas that we wanted the website to use but we couldn't because of the limited time and because we didn't have the facilities needed e.g. graphics software like Photoshop, and 3D studio max this was the down side. I now understand that the Internet is even bigger than I thought at first, it is also a very successful business venture. Websites need to be designed with professionalism and capital in order for them to reach their potential. I believe that the Internet has a very promising future, as it hasn't reached it peak or met its match. The Internet is a fine resource and doesn't need to be changed or altered in any way. Changes will cause a risk of a decrease in the interest of the audience; adjusting to the new Internet may be difficult and hard to understand. Changes may mean the whole system may have to change. But the question is if it is changed will it still be the Internet? ...read more.