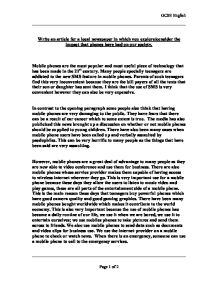 Write an article for a local newspaper in which you explore/consider the impact that phones have had on our society. Mobile phones are the most popular and most useful piece of technology

Write an article for a local newspaper in which you explore/consider the impact that phones have had on our society. Mobile phones are the most popular and most useful piece of technology that has been made in the 21st century. Many people specially teenagers are addicted to the new SMS feature in mobile phones. Parents of such teenagers find this very inconvenient because they are the bill payers of all the texts that their son or daughter has sent them. I think that the use of SMS is very convenient however they can also be very expensive. In contrast to the opening paragraph some people also think that having mobile phones are very damaging to the public. ...read more.

This is very important use for a mobile phone because these days they allow the users to listen to music video and play games, these are all parts of the entertainment side of a mobile phone. This is the main reason these days that teenagers buy powerful phones which have good camera quality and good gaming graphics. There have been many mobile phones bought worldwide which makes it contribute to the world economy. This is also very important because the use of mobile phones has become a daily routine of our life, we use it when we are bored, we use it to entertain ourselves; we use mobiles phones to take pictures and send them across to friends. ...read more.

The latest phones that have been made are also able to be used as portable media centres. They are able to carry large video files which have a huge memory and which also have incredibly powerful processors and very powerful graphics. In contrast to all my views I think that all of these factors should be targeted towards the children underage and the factors that affect them when they use mobile phones. I think that there should be a age limit towards the use of mobile phones, however even when an adult uses a mobile phone they should also be a limit to the amount of use pout into the device. Mobile phones are devices that are going to be leading out entertainment, our social lives, our physical life. ?? ?? ?? ?? GCSE English Page 1 of 2 ...read more.