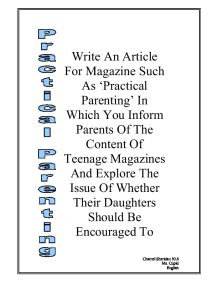 TEEN MEDIA MANIPULATION Do You Know What Your Teenager Is Reading? I am reporting as both a child psychologist and a concerned parent, on the matter of the content of teenage magazines. My own daughter made me aware of this issue when I decided to look through one of her 'Bliss' magazines; I discovered what kinds of stories were printed in them and others teenage magazines such as 'sugar'. I was both shocked and concerned by the material printed in the 'teen mags' and decided that I should write this article to inform other parents of the content of them. The magazines I researched were; 'Bliss' which is aimed at 14-17 year olds and 'Sugar' which is aimed at 13-19 year olds, considering the graphic and persuasive nature of the content of these magazines, this seems, to me, to be an inappropriate age range. Advertisement Archive The magazines are over-spilling with desirable products, which is yet another attraction for teenage girls. On average the magazines contain 17.5% of advertisements of up-to-date fashion items such as clothes, shoes and fragrances. ...read more.

Though these stories are not stories that teenage girls relate to, they seem very interested in them. This makes me very uncomfortable as a parent and as a child psychologist as I find it difficult to associate the interest in such horrendous articles, to the other interests of the average teenager. I think that stories that relate to the more common occurrences in a teenagers' life's, such as sporting achievements and charities, which they could get involved in would be more appropriate. Picture Perfect All the magazines feature flawless models, dressed to impress on the front covers, with headlines such as '184 a-list model looks' and 'sexiest party fashion'. To my 14-year-old daughter and young girls like her, these images are ones that they aspire to. With pictures coupled with the headlines, the covers entice them into the materialistic fashion obsessed world of the a-list celeb. The immaculate appearance of the models is simply not a realistic view of an average teenager, they're even often air-brushed; the images portrayed could make young girls feel inadequate purely because of natural teenage blemishes. ...read more.

This makes the reader feel like the article is addressing them personally. This, coupled with the use of colloquial language such as 'celeb divas' fashion tips,' relates to the way teenagers often speak to their friends. It is easy, even as an older reader, to forget that adults have written the articles. There are several examples of alliteration, 'cool catwalk styles.' They make the headlines more interesting to the reader; they also use other techniques such as personification, to achieve this as well. I think the writers use Standard English so as to make the reader feel more mature and the colloquialisms to make the reader believe the writer was a lot younger. In conclusion, I believe that these magazines could maybe influencing young teenagers and not necessarily in a good way. Although the writers try to use language of the same level, the stories they produce, I think, should be aimed at a much older age group. I think it would definitely be advisable for parents to read these magazines before allowing their daughters to do so. In this way you can individually censor and decide what you think is appropriate for your daughters. Chantel Sheridan 10.6 Ms. Cupid English ...read more.