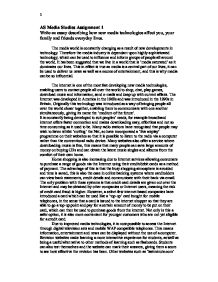 Write an essay describing how new media technologies affect you, your family and friends everyday lives.

AS Media Studies Assignment 1 Write an essay describing how new media technologies affect you, your family and friends everyday lives. The media world is constantly changing as a result of new developments in technology. Therefore the media industry is dependant upon highly sophisticated technology, which can be used to influence and inform groups of people all around the world. It has been suggested that we live in a world that is 'media saturated' as it dominates our lives. This in effect is true as media is a central part of our lives, it can be used to deliver us news as well as a source of entertainment, and this is why media can be so influential. The internet is one of the most fast developing new media technologies, enabling users to contact people all over the world to shop, chat, play games, download music and information, send e-mails and keep up with current affairs. The Internet was developed in America in the 1960s and was introduced in the 1990s in Britain. Originally this technology was introduced as a way of bringing people all over the world closer together, enabling them to communicate with one another simultaneously, giving its name the 'medium of the future'. ...read more.

Many people find this an excellent way of keeping in contact with relatives and friends, particularly those who live a long distance away. The only social problem that has been recognised by researchers is that emailing has begun to discourage people from writing letters, therefore making us more computer literate but less inclined to keep up good standards of writing skills. The increase of digital television sets in homes has enabled people to access the internet, shop, send emails and view a wide variety of satellite channels in the comfort of their own home. It is thought that by 2010, digital broadcasting will be nationwide. It seems inevitable that this means audiences will have to subscribe to certain satellite or cable channels to pay for this investment and also pay extra to view certain major sporting events. Not only will this prove costly for many, but it will also cause an increase in television viewing, therefore discouraging other hobbies such as sport, reading and creative activities. The BBC (British Broadcasting Cooperation) was founded in 1926, and now contains channels such as 'News 24' on digital television, which means news updates can be viewed twenty-four hours a day. ...read more.

Advertisements have now taken over and dominated most aspects of new media, influencing consumers to buy the latest products etc. This can lead to social and economic problems as the less fortunate become isolated for not having the latest desirable goods, and can lead to an increase in crime, theft and resentment. Increased stereotyping within the media (for example 'Black music' radio stations, Gay/lesbian chat rooms) results in minority group characteristics being exaggerated and can encourage prejudice opinions. Stereotyping is often based on the activities of one or two individuals whose activities have provided a source of a newspaper headline or other media project, for example 'youth drug culture' can be seen as an example of stereotyping teenagers as a result of a select few individuals abusing drugs. Common ideologies may also be a result of the way new media technologies are used to portray people of different ages, gender, social background, ethnic background etc in both positive and negative ways, so that the group can be stereotyped and depicted as a certain 'type' of person. As you can see, new media technologies influence different aspects of our everyday lives in many different ways but their key purposes are to inform, explain and describe current affairs and to entertain. This encourages interpersonal communication as well as group and mass communication amongst people of all social and ethnic groups. 1 ...read more.