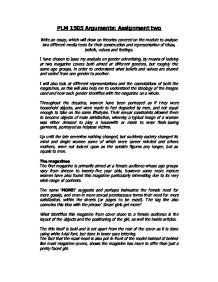 Write an essay, which will draw on theories covered on the module to analyse two different media texts for their construction and representation of ideas, beliefs, values and feelings.

PLM 1505 Arguments: Assignment two Write an essay, which will draw on theories covered on the module to analyse two different media texts for their construction and representation of ideas, beliefs, values and feelings. I have chosen to base my analysis on gender advertising, by means of looking at two magazine covers both aimed at different genders, but roughly the same age groups, in order to understand what beliefs and values are shared and varied from one gender to another. I will also look at different representations and the connotations of both the magazines, as this will also help me to understand the ideology of the images used and how each gender identifies with the magazine on a whole. Throughout the decades, women have been portrayed as if they were household objects, and were made to feel degraded by men, and not equal enough to take on the same lifestyles. Their s****l constraints allowed them to become objects of male satisfaction, whereby a typical image of a woman was either dressed to play a housewife or made to wear flesh-baring garments, portrayed as helpless victims. Up until the late seventies nothing changed, but suddenly society changed its mind and single women some of which were career minded and others mothers, were not looked upon as the outside figures any longer, but as equals to men. ...read more.

Take the title 'Maxim'; in order to gain the attention of a man, advertisers and the media have come to understand that objects, which state they are 'BIG', attract men. 'The idea that big is better to men goes back to advertising from past decades, and allows them to feel superior over females.' Raymond Williams, 'advertising the magic system', 1996 Other forms which establish their superiority over women is their need for scientific jargon, to prove to women (and sometime themselves) that they are the more intelligent of the two genders. Other male magazines tend to use abbreviated terms for titles or objects, which connote authority, such as 'FHM', 'GQ' or even 'MAX POWER'. These titles connote the idea of periodic and scientifically symbols or even macho representations such as G.I Joe. Max Power being a prime example of the bigger is better theory shared by a majority of males. In which case all the titles connote the idea that by reading these magazines they will fundamentally gain enjoyment and authority as well as establishing the male gender as the more dominant of the two. The placing of the title also suggests that what men really want from a magazine is what the media has always believed to be true; s******y portrayed, attractive young women spread across the front cover, regardless if the title ...read more.

In conclusion what I have noticed within my brief analysis is that although times have changed male magazines still seem more relatable to today's society and contain more in-depth issues which a lot of female magazines fear to tread on. However this may only be the start, barriers have already started to break between the two genders and with time these barriers may cease to exist. As women are now given more s****l freedom and social changes have taken place in terms of media influences (for instance commercials now cater for all genders and represent them as equal to men). A lot more of society now embrace the new feminist women and single mothers and radical changes have taken place in order to have reach this state as well as changes from men and their somewhat narcissistic attitudes. A quote, which most women of today's society can now identify with would be that of Charles Fourier in 1808, which said stated that 'The extension of women's rights is the basic of all social change.' In other words allow women to live the way in which they choose and not condemn them for it and changes within the sexes will be made for the better. ...read more.