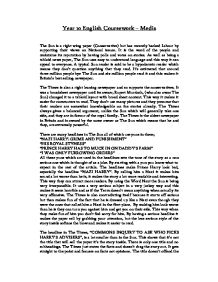 Year 10 English Coursework - Media The Sun is a right wing paper (Conservative) but has recently backed Labour by supporting their views on National issues. It is the word of the people and maintains its reputation by having polls and votes on stories. As well as being a tabloid news paper, The Sun uses easy to understand language and this way it can appeal to everyone. A typical Sun reader is said to be a hypodermic reader which means they don't question anything that they read. It's estimated that around three million people bye The Sun and six million people read it and this makes it Britain's best selling newspaper. The Times is also a right leaning newspaper and so supports the conservatives. It was a broadsheet newspaper until its owner, Rupert Murdoch, (who also owns The Sun) changed it to a tabloid layout with broad sheet content. This way it makes it easier for commuters to read. They don't use many pictures and they presume that their readers are somewhat knowledgeable on the stories already. The Times always gives a balanced argument, unlike the Sun which will generally take one side, and they are in favour of the royal family. The Times is the oldest newspaper in Britain and is owned by the same owner as The Sun which means that he and they, are extremely powerful. ...read more.

It shows them is a better light. Underneath the picture there is an anchorage. (The small piece of writing underneath the picture) "A swastika at Balmoral could further embarrass for the queen." The anchorage leads you on to another part of the story which you don't know about and this will make more people read the article to find out about it. The layout of The Sun article is around seven eighths picture and one eighth writing. It is set out in an informal way and has different style writings and different size pictures throughout the article. There are different stories and a lot of different headlines to draw readers in. The pictures and headlines are the main focuses of this article they sell the paper and draw readers in. The pictures say a lot about the story and so only a little bit of text is needed to reinforce what can be seen. On one side of the article there is a poll. This poll is very important because it is the word of the people and the Sun represents the word of the people and so this backs up the reputation of the newspaper. In the poll the questions start off as being related to the story "It was extremely bad taste of Harry to dress up as a Nazi" but then go on to have nothing to do with the story on Prince Harry and they involve more of the royal family. ...read more.

In the second half of the article the story leads on to another story where you find out more facts about the swastika and how a symbol at Balmoral that is similar to the swastika could cause even more embarrassment. "The war memorial just outside the gates of the highland holiday home is decorated with the new offensive mark" but because The Times is pro royal they back this accusation up with an excuse and a reason to this symbol. "The symbol stood for goodwill and wellbeing before it was hijacked by the Nazis." In the main article the Times refers to The Sun and its article and pictures. By saying that you can see this picture in The Sun it is advertising its sister paper and getting more people to bye it and therefore getting more money. I think that The Sun is a good paper if you just want to get an outline of a story and don't know too much about the story in the first place. The Times is a much more sophisticated paper that is for people how know about the story and are looking for a lot more detailed analysis of a story. In my opinion the Times is a better paper to buy. It allows you to make your own decisions and so you're more likely to come to a better well educated answer because you have more information and more truthful facts that you can rely on. ?? ?? ?? ?? ...read more.