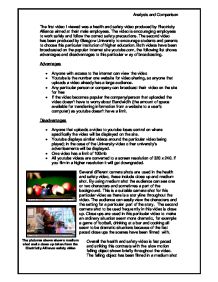 The first video I viewed was a health and safety video produced by Electricity Alliance aimed at their male employees. The video is encouraging employees to work safely and follow the correct safety precautions. The second video has been produced by Glasgow University to encourage students and parents to choose this particular institution of higher education. Both videos have been broadcasted on the popular internet site youtube.com, the following list shows advantages and disadvantages to this particular way of broadcasting.

Several different camera shots are used in the health and safety video, these include close up and medium shot. By using medium shot the audience can see one or two characters and sometimes a part of the background. This is a suitable camera shot for this particular video as there is a storyline throughout the video. The audience can easily view the characters and the setting for a particular part of the story.  The second camera shot to be used frequently in this video is close up. Close ups are used in this particular video to make an ordinary situation seem more dramatic, for example a game of football, drinking at a bar and cooking all seem to be dramatic situations because of the fast paced close ups the scenes have been filmed with. 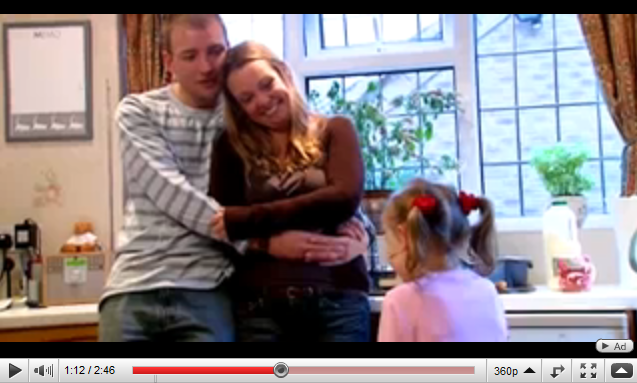 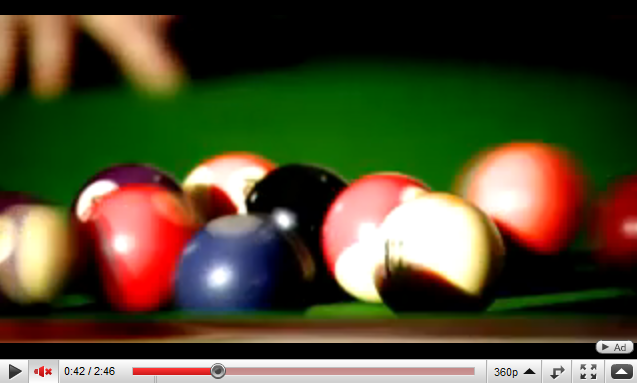 Overall the health and safety video is fast paced and striking this contrasts with the slow motion falling object shown briefly throughout the video. The falling object has been filmed in a medium shot and falls from the tops of the shot to the bottom. The object is unknown to the audience until the accident is shown at the end of the video.

The video starts and ends with the company website animation, the first time it is displayed the website name fades out and the falling object appears. The transition is done smoothly as the background for both sequences are plain white. When the acting part of the video is over it then fades to a black background and the credit “Heads up” appears. The credit heads up is appropriate for two reasons the first is that the character Gary in the video is killed by a falling object hitting his head. The second reason is that the phrase heads up can also mean be careful this is suitable for the video as it is trying to promote safe working in the work place.

Throughout the video the song All Day and All Night by The Kinks is being played, the song is upbeat and elevating and compliments the fast paced footage. Both the up lifting music and the dramatic camera work attract the audience to watch the video. Although the song is still the main audio feature for the audience, the sounds from characters can still be heard. This makes the situations seem more realistic for example you can hear a character crying and Garry’s heavy breathing after he escapes from the falling object. Additional music clips have also been added to the video to give a realistic effect such as a police siren and the sound of something falling through the air, which is played every time the falling object is shown. Very little dialogue is used in this video, this could have be been done to focus all the attention of the audience on the actual content and storyline of the video.

At the end of the video the main character uses explicit language this gives an insight into the target audience as this type of language is usually only suitable for an older age range. The actual company that produced the video also gives insight into the target audience, the safety video has been produced for electricians and jobs of this nature are usually dominated by men.

A wider range of shots have been used in the second video compared to the first basic video. The main shot that is used is the long shot; this is mainly used to show the university building and its surrounding area. This particular shot is good to use as it saves time, one scene can be filmed and shown in one shot rather than using a pan shot to show the whole subject. Several clips also show the students on campus watching a music performance, all the students featured in this scene are upbeat and cheerful. This has been shown to give the impression that Glasgow University has a fun and live atmosphere that the students will be a part of if they attend this university. Long shots have also been used to show the inside of the university and all the facilities they have to offer. Lastly long shots have been used to show striking shots of Glasgow, this is showing the viewers all that Glasgow has to offer.

Other shots such as zoom, close up and pan shot are also briefly used. Pan shot is mainly used to show the outside and inside of the university buildings and campus. On two occasions while pan shot is being used the presenter is talking about the number of students that attend the university and students opinions of the institution of higher education. During this commentary shots of the students are being shown to the audience, this strengthens what the presenter is saying to the audience.  Zoom shot is used to clearly show the expression on peoples faces and used when the audience needs to clearly see something in particular, for example the University sign on the side of a building. A close up is also used to show the university sign; the shot slowly focuses on the sign as it starts off unclear. Basic eye level camera shots have been mainly been used in the video, this is good as it gives the audience an impression that there actually at the university. On Several occasions the camera is looking up at buildings, as if it was from a person’s point of view. The last scene in the video shows a bird’s eye view of Glasgow. 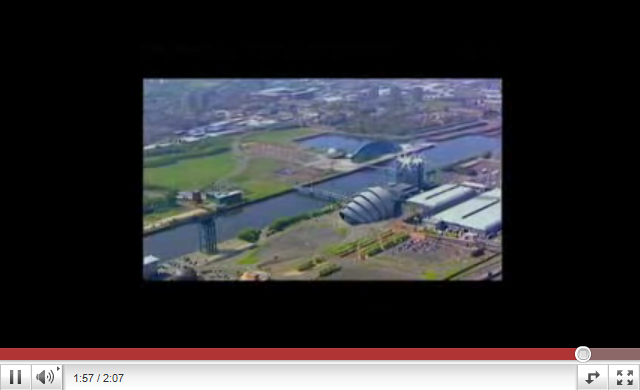 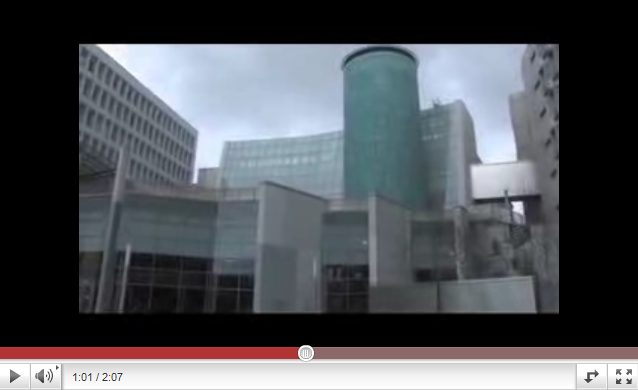 The first editing technique appears early in the video, as the presenter is talking the audience through the history of the university, several still images are shown. These include black and while pictures of the university’s original building and the original cookery students. Half way through the video several other brief still images of the campus and a music/religious ceremony are shown to the audience. As the presenter is talking about facts and static’s of the university two newspaper mastheads are displayed over of the footage that are being shown. The first is The Guardian’s masthead and the second is The Sunday Times these have been added to the video to give evidence for the information the presenter is giving the audience. At this point in the promotional video one more editing technique has been used. Basic footage of students on campus has been speeded up this gives the video a professional effect.

The music featured in the video is used as background music; it starts immediately and ends when the entire video is over. When the presenter isn’t talking the music gets louder, this is a technique used to hold the audiences attention. The music itself is upbeat and uplifting and gives the university footage a fresh and contemporary representation. The presenter’s voice is clear and easy to understand, he has a Scottish accent which is appropriate to the location of the university being promoted in the video. The presenter covers the following topics:

All these topics are subject’s potential students would like to know about when making their discussion. The positive reviews are also a good way to convince students and their parents that this particular university is a high-quality place to study.

Although the Electricity Alliance health and safety video is striking and sends a powerful message. Overall I think the university promotional video is more effective. I think this for the following reasons: