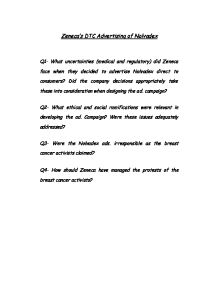 FDA's guide lines were influencing the Zeneca's decisions on advertisement campaign. They were trying to follow FDA's regulations but other side they had ignored physicians and activist groups during the development of DTC advertisement campaign and later Zeneca's campaign was concern by these independent groups. They had tried to make branded ad but due to the regulatory it was required full information regarding drug. They were feared that if they disclosed the information regarding drug's benefit and risk it would affect the advertisement effectiveness. That's why they decided not do the branded advertisement. Zeneca's unbranded advertisement was less concern by regulatory in terms of disclosing drug's information but more concern by activist groups because of incomplete information. Also assumptions in advertisement were not appropriately taken into consideration e.g. "women care their body shape more then health or you can only get breast cancer if you have family history" which were concerned by regulatory and activist groups. In brief Zeneca had taken inappropriate decision regarding DTC advertisement campaign. They did not involved patients, physicians, distributors and advocacy groups before developing DTC campaign. They had followed the rules and regulations of FDA but failed to take physicians, patients and activist groups in confidence. 2-Ethical and social ramifications and Zeneca's response for these issues As it mentioned above regarding Zeneca's decisions on DTC advertising campaign were not appropriate which raised some ethical social questions. ...read more.

had done some research on focusing group to understand how women felt about breast cancer but the should do more research on physicians, women and activists groups about their views for Nolvadex and its advertisement before developing DTC campaign o They should protect the confidentiality of patient information because DTC enables drug companies to collect the name of patients and it also encourages them to seek from pharmacies or other sources, the name of patients taking their drug or a competitor's drug o They should avoid unbranded advertisement which could mislead the message to women. Zeneca should use branded advertisement with fair balance of drug benefits and risk and also they should take some responsibility for potential drug's risks. Because if they mention the brief summary about drug then women will get right message, physicians and patients will trust on Nolvadex o They should avoid any noise in whole communication process like incomplete information or incorrect assumptions which could be concern by activist groups o They should be consistence and try not to make any incorrect assumptions which can be concern by regulatory and activist groups. They should use accurate communications of drug indications. To meet this standard, a commercial must mention the limitation on indications. They should make sure that commercial will provide equally prominent and equally communicative language for benefits and risks. ...read more.