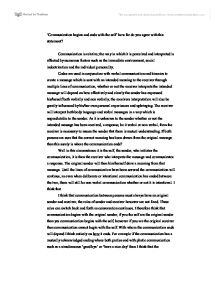 Communication begins and ends with the self how far do you agree with this statement?

'Communication begins and ends with the self' how far do you agree with this statement? Communication is relative; the way in which it is perceived and interpreted is affected by numerous factors such as the immediate environment, social indoctrination and the individual personality. Codes are used in conjunction with verbal communication and kinesics to create a message which is sent with an intended meaning to the receiver through multiple lines of communication, whether or not the receiver interprets the intended message will depend on how effectively and clearly the sender has expressed his/herself both verbally and non verbally, the receivers interpretation will also be greatly influenced by his/her own personal experiences and upbringing. The receiver will interpret both body language and verbal messages in a way which is unpredictable to the sender. As it is unknown to the sender whether or not the intended message has been received, a response, be it verbal or non verbal, from the receiver is necessary to assure the sender that there is mutual understanding. ...read more.