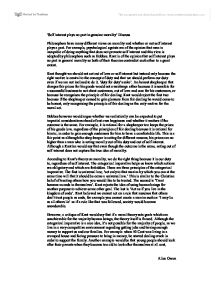 Self interest plays no part in genuine morality Discuss

'Self interest plays no part in genuine morality' Discuss Philosophers have many different views on morality and whether or not self interest plays a part. For example, psychological egoists are of the opinion that man is incapable of doing anything that does not promote self interest and this view is adopted by philosophers such as Hobbes. Kant is of the opinion that self interest plays no part in general morality so both of their theories contradict each other to a great extent. Kant thought we should not act out of love or self interest but instead only because the right motive is central to the concept of duty and that we should perform our duty even if we are not inclined to do it, 'duty for duty's sake'. An honest shopkeeper that charges fair prices for his goods would not overcharge either because it is sensible for a successful business to not cheat customers, out of love and care for his customers, or because he recognises the principle of fair dealing. ...read more.

According to Kant's theory on morality, we do the right thing because it is our duty to, regardless of self interest. The categorical imperative helps us know which actions are obligatory and which are forbidden. There are three principles of the categorical imperative. The first is universal law; 'act only to that maxim by which you can at the same time will that it should be come a universal law.' This is similar to the Christian belief of treating others how you would like to be treated. The second is 'Treat humans as ends in themselves'. Kant rejects the idea of using human beings for another purpose to achieve some other goal. The last is 'Act as if you live in the kingdom of ends'. Kant believed we cannot act on a rule that assumes that others don't treat people as ends, for example you cannot create a maxim such as 'I may lie as all others lie' as if a rule like that was followed, society would become unendurable. ...read more.

Social pressures and economic needs, e.g. going away to work somewhere have to come first in most cases. A defender of the Kantian position would say that moral theories are generally very demanding and ask us to aspire to things we can't always achieve. But this shouldn't mean that we give up trying, because it is a worthwhile aim. Although this is a good counter argument and does outweigh the fact that the theory is slightly flawed, asking people to act morally purely because of duty and regardless of themselves is a hard thing to ask of anyone. Although self interest should play no part in genuine morality, it is foolish to think that the majority of society can keep to such a difficult task. Self interest playing no part in morality is something to aspire to, but realistically, self interest will play a part to at least an extent in most people's lives and although it can be argued that it is not genuine morality when this is the case, it doesn't matter if the outcome is the same. Alice Owen ...read more.