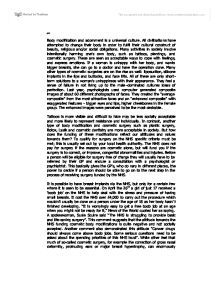 Body Modification Perfect/imperfect; cultural values and the body How the NHS funding of body modification reflects our attitudes and values towards the body... To fund or not to fund?? Body modification and adornment is a universal culture. All civilizations have attempted to change their body in order to fulfil their cultural construct of beauty, religious and/or social obligations. Many activities in society involve intentionally harming one's own body, such as tattoos, piercings, and cosmetic surgery. These are seen as acceptable ways to cope with feelings, and express emotions. If a woman is unhappy with her body, and wants bigger breasts, she can go to a doctor and have the operation done. Many other types of cosmetic surgeries are on the rise as well: liposuction, silicone implants in the lips and buttocks, and face lifts. All of these are only short- term solutions to a woman's unhappiness with their appearance. ...read more.

On April the 26th a girl of just 17 received a 'boob job' on the NHS to help deal with the stress and pressure of having small breasts. It cost the NHS over �4,000 to carry out the procedure which wouldn't usually be done on a person under the age of 18 as her body hasn't finished developing. "It is worryingly easy to get a free boob job at an age when you might not be ready for it," News of the World quoted her as saying. A spokeswoman, Susie Squire said "The NHS is struggling to provide basic and life-saving surgery". This comment suggests that the attitude towards the NHS funding cosmetic body modifications is quite negative and not socially accepted. Another comment also demonstrated this attitude "Cancer drugs should always come above boob jobs. Some serious questions need to be asked about the spending priorities of this NHS trust". ...read more.

When deciding if a person is entitled to a nose job on the NHS there is a basis on which the decision is made which involves the nose being measured to determine if it is in proportion with the face. Breast reduction can also be decided in this way, by measuring the body and asking is it in proportion or should surgery be used, long term effects would also be looked at. The National Institute for Clinical Excellence (NICE) says that surgery should be offered surgery on the NHS for people who are morbidly obese. This is a technical term for people who have a body mass index (BMI) of 40 or more. BMI is a calculation which compares a person's weight with their height. A BMI of 20-25 is considered healthy and NICE has recommended that surgery should be an option for adults who have received intensive management in a specialised hospital obesity clinic and who have failed to respond to all other forms of treatment. It is expected to cost the NHS an extra �21m over the next eight years. ...read more.