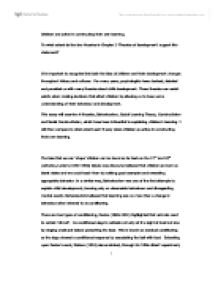 Children are active in constructing their own learning.

Children are active in constructing their own learning. To what extent do the four theories in Chapter 2 'Theories of development' support this statement? It is important to recognise that both the idea of children and their development changes throughout history and cultures. For many years, psychologists have devised, debated and provided us with many theories about child development. These theories can assist adults when making decisions that affect children by allowing us to have some understanding of their behaviour and development. This essay will examine 4 theories, Behaviourism, Social Learning Theory, Constructivism and Social Constructivism, which have been influential to explaining children's learning. I will then compare to what extent each theory views children as active in constructing their own learning. The idea that we can 'shape' children can be found as far back as the 17th and 18th centuries, Locke's (1632-1704) tabula rasa discourse believed that children are born as blank slates and we could teach them by setting good examples and rewarding appropriate behavior. In a similar way, Behaviourism was one of the first attempts to explain child development, focusing only on observable behaviours and disregarding mental events. Behaviourists believed that learning was no more than a change in behaviour often referred to as conditioning. There are two types of conditioning, Pavlov (1849-1936) highlighted that animals react to certain 'stimuli'. He conditioned dogs to salivate not only at the sight of food but also by ringing a bell just before presenting the food. This is known as classical conditioning as the dogs showed a conditioned response by associating the bell with food. ...read more.

However, Donaldson (1978) adapted Piaget's tasks so they were presented to the children as games and to make more 'human sense'. From her results she concluded that children had a better understanding than Piaget (1896-1980) first believed. Whilst echoing some of Piaget's (1896-1980) ideas, Vygotsky (1896-1934) challenged the notion that child development was a universal or natural process but instead argued that children learn within their social and cultural context. Known as the social constructivist theory, he believed that it was through social activities that children acquire cultural 'tools' including language and rules. He suggested that development did not happen within the child but rather takes place between the child and others. In turn, he placed great emphasis on adults and peers working together to share their knowledge with younger children. He concluded that children had potential but it was an adult's job to uncover and develop it, this is referred to as the Zone of Proximal Development (the gap between what the child is able to do and what they have the potential to do). The support provided by the adult or more knowledgeable other in the ZPD is known as scaffolding. This process involves the adult or peer providing assistance until the learner can gradually take control of the task. This is a technique often used by primary schools in schemes such as 'buddying' (when a young child is paired up with an elder peer to provide help, guidance and support), either on their first day at school or joining the school council (Ke312 Video 3). ...read more.

has been criticised for. By recognising the importance of social interaction and language Vygotsky explains that learning is a reciprocal process. He believed that rather than learning being self directed as Piaget (1896-1980) suggests, a child can achieve more complex tasks when they have help from people, adults or other children, who are more experienced. This was a process witnessed by myself after presenting my youngest son with a new shape sorter, on his own he was unable to manipulate the shapes into the correct spaces, yet after help and instruction from his elder brother he was able to establish a method of getting the shapes to fit in correctly. By studying these 4 theories, this essay has highlighted a number of factors which influence learning and development, such as social, genetic and environmental factors. Each theory provides us with a better understanding of child development and although they may have differing beliefs there is also some obvious overlap. For example all theories recognise that the environment plays a role in development, albeit to differing degrees. Whilst behaviourist models suggest children are passive, studies conducted by Bandura, Piaget and Vygotsky have all recognised that children are active participants when constructing their own learning. I feel that whilst each theory has been shown to have their own views on development, all children are different. Therefore, it is important to recognise that all theories have something to contribute to the larger picture and no one theory is correct in its assumptions of children's learning. 'Children influence what happens to them just as they are influenced by their experiences' (Oates et al, 2006, pg 7). ...read more.