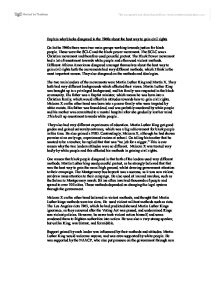 Explain why blacks disagreed in the 1960s about the best way to gain civil rights On In the 1960s there were two main groups working towards justice for black people. These were the SCLC and the black power movement. The SCLC was a Christian movement and therefore used peaceful protest. The Black Power movement had a lot of resentment towards white people and often used violent methods. Different African Americans disagreed amongst themselves about the best way to gain civil rights both the movements had very different methods, which I think is the most important reason. They also disagreed on the methods and ideologies. The two main leaders of the movements were Martin Luther King and Martin X. They both had very different backgrounds which effected their views. Martin Luther King was brought up in a privileged background, and his family was respected in the black community. His father was a Baptist minister, which means he was born into a Christian family, which would affect his attitudes towards how to gain civil rights. Malcom X on the other hand was born into a poorer family who were targeted by white racists. ...read more.

However, he never took violent action himself, and some condoned them to frighten authorities into action He was also a very strong speaker, but unlike King, was blatant, and formidable. Support gained by each leader was influenced by their methods and attitudes. Martin Luther King would welcome anyone, and was even supported by white people. He was supported by the NAACP, who also put pressure on the government through non violent methods and by southern Christians, who agreed with his nonviolent methods, and supported his strong Christian attitudes. One reason that there was a disagreement over which method was best to gain civil rights was that both the leaders had different groups of people supporting them. Malcom X was only supported by black people, as his attitudes could often be seen as racist by white people. He wouldn't have welcomed support from white people. A lot of his supporters were younger people who were ready for change and had more progressive ideas. They also thought that Martin Luther Kings methods were too slow, and turned to Malcom X for a radical change. ...read more.

As the two leaders were almost opposite in their ideals and methods, I believe they would be more successful if they had cooperated. However, due to their differences in background, they did not have the same ideas about how the situation should be dealt with. Malcom X's hard background made him bitter towards white people, and this made him adopt violent methods and want the situation changed quickly. Contrastingly, Martin Luther King's privileged background gave him faith in the legal system, and his devout Christianity taught him to " turn the other cheek". However, it is these differences that I believe would have made them successful if they were to cooperate, as they both had a lot to offer the campaign. In conclusion I believe that the main reason that blacks disagreed on which was the best method to gain civil rights was the difference in the leaders methods. This is because people with different attitudes and lifestyles were divided between which was the better method to use. Some black people wanted a quick fix to the problem and had a lot of bitterness towards white people, and so they followed Malcom X. Black people who were stronger Christians and had had better educations and lives often followed Martin Luther King. ...read more.