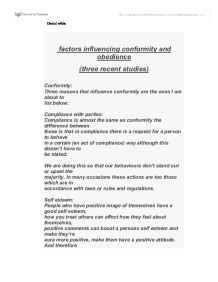 factors influencing conformity and obedience (three recent studies) Conformity: Three reasons that influence conformity are the ones I am about to list below: Compliance with parties: Compliance is almost the same as conformity the difference between these is that in compliance there is a request for a person to behave in a certain (an act of compliance) way although this doesn't have to be stated. We are doing this so that our behaviours don't stand out or upset the majority. In many occasions these actions are too those which are in accordance with laws or rules and regulations. Self esteem: People who have positive image of themselves have a good self esteem, how you treat others can affect how they feel about themselves, positive comments can boost a persons self esteem and make they're aura more positive, make them have a positive attitude. And therefore work more effectively and be a positive member of the team. Social norms: Social norms are what society deems appropriate for you social group. There was an important study carried out by Deutsch and Gerard in 1955 these found that there were two possible theories that would affect your reaction to social norms these are. Informational Social Influence: This theory consists on the need to analyze different the information and different points of view. When a person is found in an unknown environment, without sufficient information about it. ...read more.

Ordinary people can engage in incredibly destructive behaviour if so ordered by legitimate authority. Other psychological research that supports this such as the study carried out by Milgram in 1974. Obedience: I am now going to discuss three major factors that influence obedience. These are the following: *Social contracts *Proximity * Fear of punishment Social contracts: What is meant by this is when we obey orders given to us by a superior without questioning their authority. As children we would eat our vegetables simply because our parents told us to. When we grow older we continue to follow other people's orders, if they are seen in authority within society. This makes following they're orders without questioning them the right thing to do. These social contracts that stay with us from our childhood throughout our lives influence how we behave towards authority later on in life. Proximity: This term is used to define how our behaviours are affected by other people, mainly how the physical distance between each other affect us. How far away we work from each other or live from each other. If you are told to do something by a person in authority you are less likely to carry this out the further away they are. For example if you worked for a large multinational company and you received a call from a superior, which was in a nearby office, and she told you to read a report by lunch time you would be ...read more.

Current issues: Nuremberg Trials 1945: Adolf Eichmann was a high ranking official in the Nazi era in Germany he worked for the SS as an Oberstrmbannufhrer. He was responsible of the transport and extermination of Jews in the holocaust this was referred to as the final solution. Because of the job role he had and because many atrocities committed had been he's idea, he was known as the 'Chief Executioner' of the Third Reich (German Empire in the times of Nazi power). Eichmann didn't have any inbuilt racial hate. He just learned to hate and did what his job involved to the best of his ability. He was later tried in the Nuremberg trials for war crimes. This bought into question the adequateness of blind obedience. Blind obedience: People in general are willing to agree to requests from people who are in authority i.e. from higher ranking people within an organization. Obedience occurs when people obey commands/orders from others to do something. Military leaders give commands that they expect to be followed without question, this is vital because troops need to be trained to follow orders and follow them so that if they are ever in a dangerous situation they can do their job effectively without to stop and evaluate which would take up time and can put the whole of the troops life at risk. But this also has its down sides, such as the events that occurred in Nazi Germany if more people had questioned what they where doing many lives could have been saved. ?? ?? ?? ?? Daniel white ...read more.