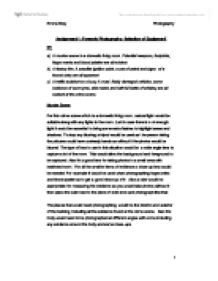 Assignment 1: Forensic Photography: Selection of Equipment' M1 a) A murder scene in a domestic living room. Potential weapons, footprints, finger marks and blood splatter are all evident. b) A factory fire. A possible ignition point, a can of petrol and signs of a forced entry are all apparent. c) A traffic accident on a busy A-road. Badly damaged vehicles, some evidence of worn tyres, skid marks and half full bottle of whiskey are all evident at the crime scene. Murder Scene For this crime scene which is a domestic living room, natural light would be suitable along with any lights in the room. Just in case there is not enough light it would be essential to bring some extra flashes to highlight areas and shadows. To stop any blurring a tripod would be used as the person taking the pictures could have unsteady hands as without it the photos would be blurred. The type of lens to use in this situation would be a wide angle lens to capture a lot of the room. ...read more.

Traffic Accident In this case there would be plenty of light as the accident would've happened outdoors. If it was in the day then flashes would be needed to light any dark patches and shadows but if it happened at night then high powered flashes would be important to capture everything. The best way to do this would be to use painting with light. This will then give the large area of the crime scene lots of light that a single flash wouldn't provide. To capture the skid marks a close-up camera should be used to catch the tire tread and a wide angled lens should be used to capture the direction and length. For the bottle of whiskey, which may have fingerprints on it should be taken with a wide angled lens after fingerprints have been dusted for as this will show where the print is in relation to the bottle. Also a gray card would be used for the light exposure for the fingerprints along with black and white film. ...read more.

Also the colour is more accurate than any captured on normal film. The images from this camera can also be viewed on location through wireless networks meaning the images taken can be seen at the crime scene just after they have been taken. The Fujifilm IS Pro SLR Digital Camera contains a kit that contains filters to offer full use of the camera in forensic science. It features a real photo processor allowing captures of clear and precise photos perfect for in lower light conditions and a zoom which restore any blurring and distortions. It also has a very useful LCD screen which can tilt, meaning it can get in hard to reach places but will still result in good quality photos. Out of both these cameras I think the Panoscan MK-3 camera is the better one due to the fact it has extra features and seems to be much better than other leading forensic cameras. As all the features I have listed make it suitable for taking to crime scenes and being used to take all the crime scene photos. http://www.bhphotovideo.com/ http://www.panoscan.com ?? ?? ?? ?? Emma Bray Photography 1 ...read more.