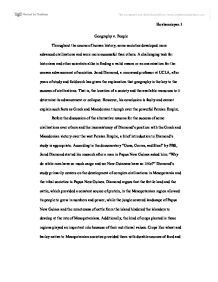 Geography v. People Throughout the course of human history, some societies developed more advanced civilizations and were more successful than others. A challenging task for historians and other scientists alike is finding a valid reason or an examination for the uneven advancement of societies. Jared Diamond, a renowned professor at UCLA, after years of study and fieldwork has given the explanation that geography is the key to the success of civilizations. That is, the location of a society and the available resources to it determine its advancement or collapse. However, his conclusion is faulty and cannot explain such facts as Greek and Macedonian triumph over the powerful Persian Empire. Before the discussion of the alternative reasons for the success of some civilizations over others and the inconsistency of Diamond's position with the Greek and Macedonian victory over the vast Persian Empire, a brief introduction to Diamond's study is appropriate. According to the documentary "Guns, Germs, and Steel" by PBS, Jared Diamond started his research after a man in Papua New Guinea asked him: "Why do white men have so much cargo and we New Guineans have so little?" ...read more.

Basically, Diamond states that it is the geography of Mesopotamia that promoted the advancement of civilizations. Now, geography itself does not account for the advancement of societies. For example, if the success of a civilization is based on its geography, than how come the mighty Persian Empire with its plentiful resources that could support enormous armies was defeated multiple times by the small city states of Greece in the Mediterranean and later completely conquered by the Macedonians? In agreement with Jared Diamond's logic, the Persians should have been victorious by a landslide; after all, the great majority of the most productive lands in the ancient world were under their domain, there was no shortage of domesticated cattle in Persia, and Mesopotamia, identified by Diamond to have the resources for a civilization's success, was under Persian control. Consequently, Jared Diamond's argument has no merits because the Persians, who had more chances of being victorious than their opponents, were crushed. ...read more.

Moreover, all hoplite soldiers were armed with shields, held in such a position that protected the top and all of the four sides of the unit. The Hoplite Phalanx was improved with lighter armor and longer spears - some stretching up to 18 feet - by Alexander The Great of Macedonia, who is one of the best candidates in history for flawless leadership. After all, Alexander, with his loyal army, was the one who conquered Persia completely and even extended his empire all the way to India. If this is not a model for great leadership and success of a civilization, then what is? In brief, Jared Diamond's study and conclusion is unsound because geography is not the key to a nation's success, cleverness and ingenuity play a much more important role instead. In addition, if Diamond's reasoning was correct, then the societies with the greatest amount of land and resources would always be victorious. The examples of Greek and Macedonian victory over the Persian Empire are only a few of the numerous events that took place throughout history that prove diamond's argument to be faulty. ?? ?? ?? ?? Hovhannisyan 1 ...read more.