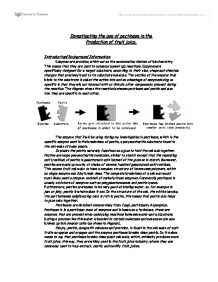 Investigating The Use of Pectinase

Investigating the use of pectinase in the Production of fruit juice. Introduction/Background Information Enzymes are proteins, which act as the acceleration devices of biochemistry. This means that they are used to catalyze (speed up) reactions. Enzymes are specifically designed for a target substrate, according to their size, shape and chemical charges that precisely bond to its substrate molecule. The section of the enzyme that binds to the substrate is called the active site and an advantage of enzymes being so specific is that they will not interact with or disturb other components present during the reaction. The diagram shows the reaction between pectinase and pectin and also how they are specific to each other. The enzyme that I will be using during my investigation is pectinase, which is the specific enzyme used in the breakdown of pectin, a polysaccharide substrate found in the cell walls of many plants. In plants the pectin naturally functions as a glue to hold the cell wall together. Pectins are large polysaccharide molecules, similar to starch except that the repeating unit (residue) of pectin is galacturonic acid instead of the glucose in starch. Moreover, pectins are made up mostly of chains of several hundred galacturonic acid residues. This causes fruit cell walls to have a complex structure of interwoven polymers, which no single enzyme can fully break down. The complete breakdown of a cell wall would most likely need a complex cocktail of carbohydrase enzymes. Commercial pectinase is usually a mixture of enzymes such as polygalacturonases and pectin lyases. Furthermore, pectins are known to be very good at binding water, so, for example in jam or jelly, pectin is what makes it set. In the structure of the cell, the middle lamella, the part between neighbouring cells is rich in pectin, this means that pectin also helps to glue cells together. Pectinases are obtained commercially from fungi, particularly Aspergillus. ...read more.

100% pectinase - 2cm3 pectinase and 0cm3 water 2. 75% pectinase/25% water - 1.5cm3 pectinase and 0.5cm3 water 3. 50% pectinase/50% water - 1cm3 pectinase and 1cm3 water 4. 25%pectinase/75% pectinase - 0.5cm3 pectinase and 1.5cm3 water At each concentration, I will measure the length of time taken for the amount of juice produced to reach 1cm3, 2cm3, 3cm3 4cm3 and 5cm3. Therefore my pilot test will also help me to decide how long to run my experiment for. Prediction I believe that the lower the concentration, the longer it will take to reach each volume. This is because a lower concentration will lead to less substrate being available to be catalyzed by the enzyme pectinase and therefore a much slower rate of reaction. Method * First of all, I will begin by labelling my beakers containing pectinase and distilled water and from these I will measure out the concentration of pectinase e.g. 75% pectinase/25% water (1.5cm3 and 0.5cm3 respectively) using a syringe. * I will then measure out 20g of apple pulp in another beaker and reset the stop clock. Then I will set up the apparatus consisting of the funnel containing a piece of filter paper in the measuring cylinder as shown in the diagram. * To start the experiment I will add the pectinase and distilled water to the apple pulp and begin the stop clock. * I will wait for 5 minutes for the enzyme to act and also stir the solution with a glass rod at one-minute intervals for 10 seconds. * After the 5-minute activity stage, I will stop the clock, pour the mixture into the filter funnel and restart the clock. * During this period of time I will continue to observe the volume of juice produced in the measuring cylinder and when it has reached the target volumes of 1cm3, 2cm3, 3cm3, 4cm3 and 5cm3, I will record the time on the stop clock. ...read more.

Even though the experiment at 70�C produced no juice, I believe that it was fine as the temperature was far too high in order for pectinase to act. If I were to do this experiment again, I think I could have repeated the pilot test at least twice to obtain more accurate and consistent results. I also could be more precise when measuring out the volume of the pectinase and buffer solution with the syringe, taking more care to look at the lower meniscus and doing the same when noting down the result from the measuring cylinder. In addition, during this experiment I could have added a control, which would have been another experiment where only distilled water would have been added to the apple instead of pectinase and buffer solution. This would have helped me to understand and make sure that the juice produced during the experiment was a result of enzyme activity rather than just the liquid material being filtered through. Lastly, I could have tried to use a buffer solution of pH5.5 as this is the optimum pH for pectinase instead of pH6, because of this, the pH of the enzyme could have an affecting factor towards my results. However, this material was not available to me at the time. In order to make my experiment more detailed when investigating pectinase, I could have had a wider range of temperatures, for example from 10�C to 70�C or even had a greater number of temperatures to investigate, such as doing an experiment at 5 degree intervals instead of 10 (25�C, 30�C, 35�C, 40�C, etc...). Furthermore, if I were to extend my experiment, I could even investigate other fruits, such as pears, to see if pectinase works in the same way. Other experiments that I could have carried out would include studying the concentration of pectinase or even a different enzyme altogether. ?? ?? ?? ?? ...read more.