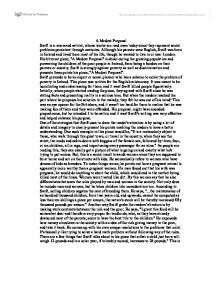 A Modest Proposal Swift is a renowned satirist, whose works are read even today since they represent social problems persistent through centuries. Although his parents were English, Swift was born in Ireland and lived there most of his life, though he wanted to live in or near London. His bitterest piece, "A Modest Proposal" is about curing the growing population and preventing the children of the poor people in Ireland, from being a burden on their parents or country. Swift is strongly against poverty as well as discrimination and presents these points his piece, "A Modest Proposal". Swift pretends to be an expert or social planner who has a scheme to solve the problem of poverty in Ireland. This piece was written for the English aristocracy. It was meant to be humiliating and embarrassing for them, and it was! Swift killed people figuratively. Initially, when people started reading the piece, they agreed with Swift since he was stating facts and presenting reality in a serious tone. ...read more.

But, this is a social insult towards women since they are supposed to be at home and not on the streets with kids. He sarcastically refers to women who have dozens of kids as breeders. To make things worse, he points out how a pregnant animal is apparently more worthy than a pregnant woman. If a man found out that his wife was pregnant, he would do anything to abort the child, which would end in the mother being killed most of the times. Women were treated like dirt. By this we can say that he also differentiates between the roles played by man and woman in the society. Not only does he include men and women, but he takes children into consideration too. According to Swift, selling children negates the cost of breeding them. He says, "...the maintenance of an hundred thousand children, from two years old, and upwards, cannot be computed ay less than ten shillings a piece per annum, the nation's stock will be thereby increased fifty thousand pounds per annum." ...read more.

Although he might have used these "facts" to get his point across, they ruin the effect of the entire piece. He insults people's religious e very unrealistic. For example, Swift claims, "I have reckoned upon a medium, beliefs which might have helped him prove his point, but can be offending to readers even today. He tends to be repetitive and tries to emphasize on certain things so many times that they lose their value. Swift tends to get carried away with his satire and comes up with unrealistic and ridiculous solutions. In this piece, Swift manages to maintain the reader's attention by using elaborate language and expressions. His tone and satiric language helps convey his message and point of view. This piece was very effective, keeping in mind his main purpose, regardless of whether or not people were offended or that they thought he was being ridiculous. He proved his point with an extraordinary plan, which he felt could have resolved the problem. Whether it would have worked or not, would have been a different issue. Thus, in reality this can be viewed as one of Swift's greatest pieces. ?? ?? ?? ?? ...read more.