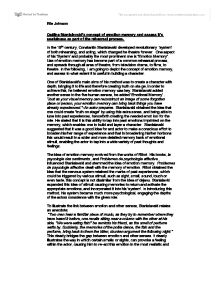 Outline Stanislavski(TM)s concept of emotion memory and assess it(TM)s usefulness as part of the rehearsal process.

Outline Stanislavski's concept of emotion memory and assess it's usefulness as part of the rehearsal process. In the 19th century, Constantin Stanislavski developed revolutionary 'system' of both rehearsing, and acting, which changed he theatre forever. One aspect of his 'System' and probably the most prominent one is "Emotion Memory". Use of emotion memory has become part of a common rehearsal process, and spreads through all area of theatre, from television drama, to films, to theatre. In the following, I am going to depict the concept of emotion memory, and assess to what extent it is useful in building a character. One of Stanislavski's main aims of his method was to create a character with depth, bringing it to life and therefore creating truth on stage, in order to achieve this, he believed emotion memory was key. Stanislavski added another sense to the five human senses, he added 'Emotional Memory'. "Just as your visual memory can reconstruct an image of some forgotten place or person, your emotion memory can bring back things you have already experienced."-An actor prepares. ...read more.

"We were eating fish!" he reminds his friend, as the smell of perfume wafts by. Suddenly, the memories of the polka dance, the fish and the perfume, bring back to them the bitter, drunken argument the following night." This clearly bridges the gap between emotion and other senses. It clearly illustrates the way in which certain smells or sights, can provoke a feeling within the actor, causing him to re-act this emotion in the most realistic and effective way possible and therefore enabling him or her to obtain Stanislavski's over-all objective to his system, which was to create truth on stage. It is arguable that use of Emotion Memory is very effective in creating believable and realistic theatre, it provides strong basis for creating depth within a character and his of her emotion. Proof of this is the many great actors who proceed solely on the basis of Stanislavski's system and his Emotion Memory, for example... However, also this method seems almost to be flawless in creating a realistic reflection of real life emotions, there is no denying that it entails great risks, ethically and mentally. ...read more.

In focusing so intently on triggering their emotion memory, they may forget the importance of building strong rapports with the ensemble, consequently defeating the object of Emotion Memory altogether by creating unrealistic relationships between characters. The system is a process in which Stanislavski aims to create a truthful performance. In order to do this, he places much focus on building a 3 dimensional character, which entails depth and thought, rather than mimicking a character on a less psychological basis. Stanislavski showed that one of the key ways in which to obtain such a detailed understanding of a character was to use the power of emotion memory, enabling the actor to relate very personally indeed with the given role. Although use of Emotion Memory is not flawless, it has been proven to be a successful means of creating a believable character. Surely this is proof that although this aspect of Stanislavski's 'system' is not perfect, it still provides a strong solid basis for an actor to develop a character on, and points towards the idea that the usefulness and success of Emotion memory is also dependent on the quality of acting the actor can provide. Elle Johnson ...read more.