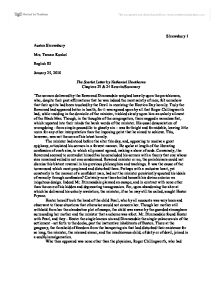 Shrewsbury 1 Austen Shrewsbury Mrs. Tamara Kunkel English III January 25, 2010 The Scarlet Letter by Nathaniel Hawthorne Chapters 23 & 24 Rewrite/Summary `The sermon delivered by the Reverend Dimmesdale weighed heavily upon the parishioners, who, despite their past affirmations that he was indeed the most saintly of men, felt somehow that their spirits had been touched by the Devil in receiving the Election Day homily. Truly the Reverend had appeared better in health, for it was agreed upon by all that Roger Chillingworth had, while residing in the domicile of the minister, trickled slowly upon him an unholy ailment of the Black Man. Though, in the thoughts of the congregation, there nagged a nameless fret, which repeated into their minds the harsh words of the minister. His usual denunciation of wrongdoing - from simple peccadillo to ghastly sin - was forthright and formidable, leaving little room for any other interpretation than the imposing point that he aimed to achieve. ...read more.

For, upon abandoning the alter at which he delivered his unholy revelation, the minister, if so he may still be called, sought Hester Prynne. Hester herself took the hand of the child Pearl, who by all accounts was very keen and observant to those situations that otherwise would not concern her. Though her mother still withheld from her the clandestine plot of escape, the child was aware by the guarded atmosphere surrounding her mother and the minister that a scheme was afoot. Mr. Dimmesdale found Hester with Pearl, and they - Hester the single known sin and Dimmesdale the single unknown sin of the settlement - set forth to the docks, past the inattentive inhabitants of Boston. There at the gangway, the threshold of freedom from the hampering sin that had disturbed their existence for so long, the minister, the misread sinner, and the mischievous child, of deity or of devil, joined in a soulful amalgamation. ...read more.

Hester, in contrast, was bursting with apprehension and dread. For whom she now wished the victory, it was impossible to ascertain. The conclusion of the brawl brought to an end the life of the Reverend Dimmesdale, who had been the architect of the scarlet letter's design. Chillingworth had exacted his revenge with a cruel finality, and Hester Prynne's hopes received with Mr. Dimmesdale that ultimate strike. It had been the meaning that the scarlet letter embodied which ended the minister's days, and though always a redoubtable part of the person that was Hester Prynne, it had now served an otherworldly purpose. What involvement it now held in the life of the illicit yet perspicacious woman, was indistinguishable. The scarlet letter, for all its purposes in shaping the form and spirit of Hester Prynne, had become an ambiguous symbol of the single and terrible transgression that she and the Reverend Mr. Dimmesdale had committed. The mark upon Hester's breast, as it could be recognized by its permanent representation of the notorious sin, failed to, in the finale of this written account, depict an irrefutable connotation. Top of Form Bottom of Form ...read more.